Stephen King has a way of taking the things that scare us—fears great and small, fantastical and mundane—and spinning them into tales that haunt, tales that cut to the core of who we are as humans. In his iconic novel PET SEMATARY, King takes that most primal of human fears: death and what comes after. King approaches it head-on, offering up a story about a man, his beloved family, and an ancient evil, that is as insightful as it is chilling.

Louis Creed accepts a job running a student medical center at a university in Maine and moves his wife and two young children to a pretty little house near the woods—but also near a highway with trucks speeding by at all hours. He meets his new neighbor Jud, an old man who was born and raised in the community and seems to know all of its history—and secrets. Jud shows the family the “Pet Sematary,” a little graveyard in the woods behind their house where children have been burying their pets for generations.

Then, when Louis’s daughter’s beloved cat is killed on the highway, Jud takes Louis to another burying ground, a hidden place even deeper in the woods that has a great and terrible power. Louis buries the cat there and the next day, the cat comes back, reeking of the grave but seemingly alive. Louis sees that the cat has come back different, however. It has come back wrong. Perhaps (in one of the book’s most iconic lines) “sometimes, dead is better.” Then when unimaginable tragedy strikes, a horrible temptation creeps into Louis’s soul, and the insidious pull of the burying ground grows ever stronger.

As one expects from Stephen King, the horrifying parts of this story are deeply scary. But more than anything, this book is a meditation on death—how different people think about it, grapple with its inevitability, and deal with the grief when it occurs. Louis is a doctor who grew up helping in a family mortuary, so he has always seen death as a natural part of life. But even for a person like Louis, when death strikes close to home unexpectedly, prematurely, it can seem as cruel and unnatural as ever.

Louis’s wife, Rachel, conversely, had the traumatic and formative childhood experience of helping care for her older sister as she died slowly and painfully of an incurable disease. For Rachel, death is an unspeakable abomination, a terror lurking around every corner, best ignored and never spoken of. And Louis’s inquisitive daughter Ellie is at an age where she is becoming aware of death for the first time, wrestling with what it means and how it relates to those she holds most dear.

The book is also an in-depth character study on how different people, and families, deal with grief. It explores the way loss can widen the existing cracks in a marriage and how sometimes one’s own grief becomes so all-encompassing that giving family members the support and comfort they need seems impossible. The novel examines how old feuds and tensions in a family can be dreadfully magnified and exacerbated by the stress of a funeral. Perhaps most of all, it shows that grief can drive a person to do things that don’t make sense and asks: is there any price too great, any line we would not cross, if it was possible to have a loved one back from beyond the grave?

As Stephen King does best, here he has taken a normal family, a normal man like Louis Creed, and put before him a paranormal, terrifying power, a temptation, and given us a fascinating and frightening front row seat as he deals with how he may use it.

Come for the creepy zombie cat, stay for the window into the human heart as it faces the greatest fear of all. 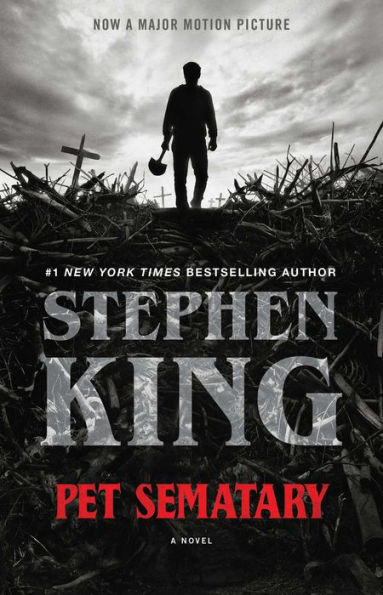 This is probably the most frightening novel Stephen King has ever written. When the Creeds move into a beautiful old house in rural Maine, it all seems too good to be true: physician father, beautiful wife, charming little daughter, adorable infant son and now an idyllic home. As a family, they've got it all...right down to the friendly cat. But the nearby woods hide a blood-chilling truth, more terrifying than death itself, and hideously more powerful.The Creeds are going to learn that sometimes dead is better.

Your Reading Guide to the Must-See Films of Spring

Zombie Cats and the Condition of a Grieving Heart

9 Great Books to Listen to During National Audiobook Month

Stephen King fans: put your knowledge to the test!
Check out this PET SEMATARY quiz from our friends, Get Literary!