“You want to believe your husband. She wants to destroy him.” When I first read this line describing ANATOMY OF A SCANDAL by Sarah Vaughan, I got goose bumps. James, a powerful man in the British government, is accused of rape. The government and media are quick to jump on the story. There will, of course, be a trial, but the slow unraveling of the story is what makes ANATOMY OF A SCANDAL so gripping. And, at the center of it all, are two women forced to grapple with the actions of a powerful man.

ANATOMY OF A SCANDAL is so much more than a timely novel—it is an edge-of-your-seat courtroom drama that delves into the mysterious history of its characters. James is not the only one with secrets to hide and skeletons in the closet.

Enter Sophie, his wife, and Kate the prosecutor. The majority of the novel is told in their narratives. Kate believes in her heart that James is guilty. Sophie is convinced of her husband’s innocence . . . or is she? ANATOMY OF A SCANDAL ratchets up the tension one step further by including flashbacks to James’s and Sophie’s college days. From there, we as readers are given another point of view to decide if these skeletons are real or merely shadows.

What makes ANATOMY OF A SCANDAL stand out, apart from its gripping plot twists, is how Sarah Vaughan explores the moral gray area that these accusations force to the surface. Is James guilty, or was it a false accusation? After all, he is innocent until proven guilty. . . .

Sarah’s writing is razor-sharp and provocative. The story feels very authentic, echoing similar cases as well as today’s political climate. This courtroom drama is necessary read for fans of a story with teeth. ANATOMY OF A SCANDAL never holds back.

Anatomy of a Scandal
by Sarah Vaughan 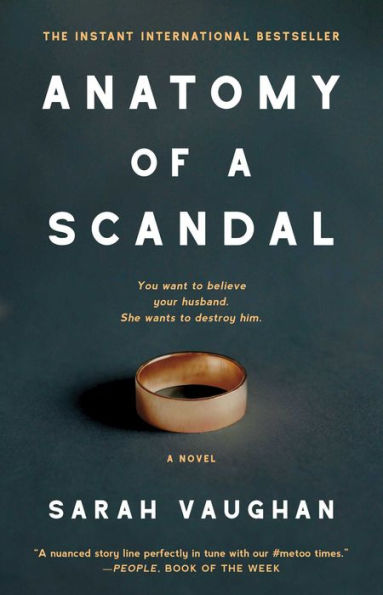 Notice: Trying to access array offset on value of type null in /home/offtheshelf/public_html/web/app/themes/ots/_inc/template-parts/books/book-modal.php on line 31
|+| Add to Your Shelf
Anatomy of a Scandal
Sarah Vaughan