If you haven’t heard, it’s a BIG year for Harry Potter and we are soooooooo excited for it! I’m a HUGE Harry Potter fan. So, for those of you who don’t know… (Have you been living under a rock?), this year marks the 20th anniversary of the initial release of the first Harry Potter book!

As a millennial in my late 20s, I grew up with Harry, Hermione, and Ron. I still remember when my sister and I were at a Scholastic Book Fair at school and she picked up the book. At the time, I wasn’t a big reader, so while I was excited about the fair, it was my sister who was really *loving* it. We bought the book and with the first spell, I was enchanted. For the subsequent books, my sister and I attended the midnight release parties at our local bookstore, and we made it out for all the midnight showings for the movies too. It’s no surprise that we now jointly own all the books, movies, and A LOT of merch. Many retailers (Primark, Hot Topic, and Pottery Barn to name a few) are embracing the fandom and are now unveiling new collections of HP merchandise. Where were they when I was a kid? I don’t have any tattoos yet, but once I work up the courage to get one, it will surely be HP related.

To celebrate Harry’s birthday I’m sharing some of my favorite Harry Potter things happening this year.

1. Scholastic is releasing new special illustrated covers of the series, with artwork by Brian Selznick. Even though I own the entire series (in multiple formats and languages), I will be buying this boxed set when it comes out at the end of August.

3. If you still can’t get enough of Harry Potter—check out the mobile app game Harry Potter Hogwarts Mystery, which was released earlier this year. The game had some early complaints—the energy levels didn’t last long—but they’ve made some recent upgrades to make it more interactive and regain energy.

4. But wait, THERE’S MORE! (Imagine I’m saying this in an infomercial voice) Fantastic Beasts: The Crimes of Grindelwald movie is hitting theaters in November. They just dropped a new trailer and it looks AHHH-MAZING! The movie is set in the Harry Potter universe, and follows a different cast of characters, but it still has some of our beloved favorites like Dumbledore.

5. If you want to feel like you’re living at Hogwarts but can’t afford a trip to Harry Potter World (Pro tip: Get the interactive wand; I felt like a kid again mastering the magical spells with it!✨), check out The Unofficial Harry Potter Cookbook. You can pretend that you are Ron and enjoy all the drool-worthy treats that J.K. Rowling describes in the series—from the Hogwarts Express Pumpkin Pasties to the Roast Chicken served in the Great Hall.

If you can’t tell, I’m a bit OBSESSED. Harry Potter changed my life. This statement might seem like an exaggeration, but it’s true. The series made me fall in love with reading and had me eagerly anticipating every new book. I probably wouldn’t have a job in publishing if I was never introduced to the Harry Potter series. J.K. Rowling, Scholastic, and Harry—thank you! To my fellow Potterheads, how are you celebrating? 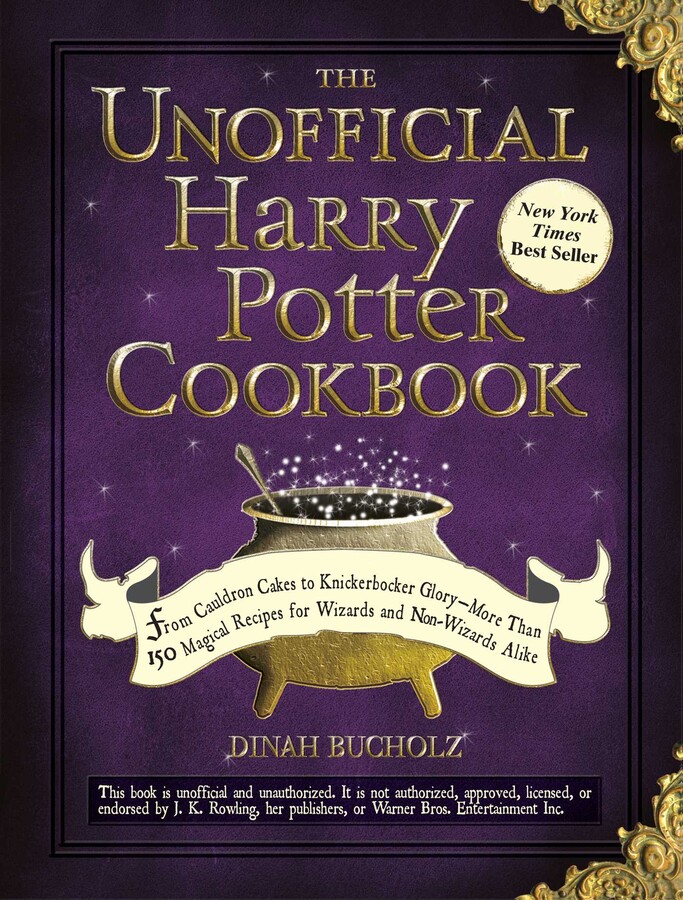 Bangers and mash with Harry, Ron, and Hermione in the Hogwarts dining hall. A proper cuppa tea and rock cakes in Hagrid's hut. Cauldron cakes and pumpkin juice on the Hogwarts Express.With this cookbook, dining a la Hogwarts is as easy as Banoffi Pie! With more than 150 easy-to-make recipes, tips, and techniques, you can indulge in spellbindingly delicious meals drawn straight from the pages of the Harry Potter series.

Conjure up feasts that rival the Great Hall’s, sweets fit for the Minister of Magic, snacks you’d find on the Hogwarts Express, and more! This bestselling unofficial Harry Potter cookbook is perfect for chefs of all ages, from new readers to longtime fans—no wands required!

Bangers and mash with Harry, Ron, and Hermione in the Hogwarts dining hall.

A proper cuppa tea and rock cakes in Hagrid's hut.

Cauldron cakes and pumpkin juice on the Hogwarts Express.

With this cookbook, dining a la Hogwarts is as easy as Banoffee Pie! With more than 150 easy-to-make recipes, tips, and techniques, you can indulge in spellbindingly delicious meals drawn straight from the pages of your favorite Potter stories, such as:

With a dash of magic and a drop of creativity, you'll conjure up the entrees, desserts, snacks, and drinks you need to transform ordinary Muggle meals into magical culinary masterpieces, sure to make even Mrs. Weasley proud!