Our twenties are crucial and full of rapid change, new perceptions, and misunderstandings of nearly everything around us. These are the themes Dave Eggers explores in his memoir about being 21 years old when both of his parents died in the span of a few weeks, leaving him to care for his eight-year-old brother, Toph.

Eggers writes beautifully about a tragic situation and as someone who has had to relate to a world that cannot relate to him.

He begins with a meandering preface that reads like a preamble gone awry, filled with lists and interruptions, cautionary tales, and—quite frankly—nonsense. Much of it is entertaining and conscientiously self-aware. He even jokingly warns you to skim it from the get-go. But through it all, you catch a glimpse of the fantastical and gut-wrenchingly personal story to come.

Eggers shares the experience of losing his mother—catapulting the reader into grief, family, loss, and the chaos of life. He goes on to take you through his changing relationships with his siblings, a move from the Chicago suburbs to California, and the launch and failure of his satirical publication MIGHT.

I love that his memoir isn’t told chronologically or sequentially, and is fraught with breaks in the fourth wall as Eggers seems to barge in and interrupt his own story. It makes me feel as if he’s in the room, just telling me stories from his life. A HEARTBREAKING WORK OF STAGGERING GENIUS shifts from reality to outrageous dramatism with ease, keeping the reader guessing and always entertained.

Take the time, for instance, that Eggers auditions for MTV’s The Real World. His interview starts normally enough as he describes his upbringing in Lake Forest, Illinois, and his encounters with Mr. T, but he winds up airing grievances about his family’s socioeconomic class and the world at large before finally ending his monologue by calling himself self-obsessed. Even in these moments, Eggers uncovers the simultaneous truth of his happiness and suffering.

Meanwhile, his brother, Toph, grows up, brimming with charm and youthful naïveté and sometimes confounding Eggers. Throughout his memoir, Eggers shows himself to be both proud and reckless, offering hilarious tales of sexcapades and moments of inadequate parenting. In all of this, Eggers reminds us that he is young, growing, trying to figure it all out and—above all—a flawed human, just like the rest of us.

Both the first and second time I read this book, I found myself laughing, crying, and underlining sections that hit too close to home—often all at once without even turning the page.

A HEARTBREAKING WORK OF STAGGERING GENIUS proves itself to be an astounding work that touched my mind and heart. Egger’s story is heartbreaking, and it is delivered with some kind of genius.

A Heartbreaking Work of Staggering Genius
by Dave Eggers 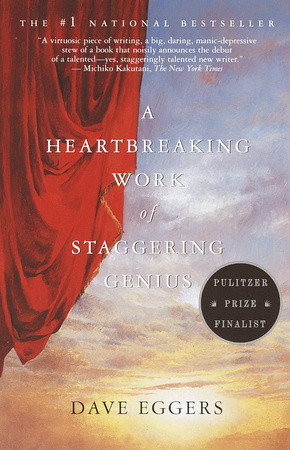 Notice: Trying to access array offset on value of type null in /home/offtheshelf/public_html/web/app/themes/ots/_inc/template-parts/books/book-modal.php on line 31
|+| Add to Your Shelf
A Heartbreaking Work of Staggering Genius
Dave Eggers

When Dave Eggers was a college senior, in the space of five weeks, he lost both of his parents to cancer and became the guardian of his 8-year-old brother. His moving memoir manages to be a simultaneously hilarious and deeply heartfelt story of the love that holds a family together. How is this hot dude not ugly-crying on the train?