Do you seek out 850-page books? Were your favorite novels published in the nineteenth century, by authors like Charles Dickens, George Eliot, and Herman Melville? Do you study horoscopes with your morning coffee?

Me neither. So when I come to you recommending Eleanor Catton’s THE LUMINARIES— an 848-page novel, studded with Victorian-era language, and deeply entangled with the signs of the zodiac—hear me out before saying it isn’t for you.

The book opens on a stormy night in 1866, when a fresh-off-the-boat prospector arrives in the gold-boom town of Hokitika, New Zealand. He takes refuge in a dingy hotel, where he stumbles upon a meeting of 12 local men. This diverse and unlikely group has been brought together by a recent crisis in which each man has been unwittingly implicated. A recluse who lived outside of town has been found dead, with an open vial of the painkiller laudanum by his side, and a bonanza of gold hidden in his cottage. How he died, where he got the gold, and who will be its beneficiary, forms the novel’s central mystery. Catton spools out the threads of the whodunit into an increasingly complex and interlinked web, then reels them back during a satisfying final act that reveals how the pieces fit together.

Catton populates Hokitika with a large cast of nuanced characters—among them a chemist, a Maori man, a prostitute, a chaplain, and a Chinese goldsmith—each drawn to the seedy frontier town for reasons of their own. While every character is associated with a zodiac sign or celestial body, the novel’s spiritual elements are worn with a light touch—more relevant to the mechanical structure humming under its hood than to your experience of the ride. The characters remain wonderfully human, and through a dynamic narrative voice that dances both around them and within their minds, you come to witness their emotions, experience their decisions, and sympathize with every one of their deeply believable flaws.

I was transported by THE LUMINARIES. Before my nightly dive into its pages, I often found myself thinking, with giddy anticipation, “I’m going back to Hokitika.” The novel’s length feels earned, and not at all like a slog, because Catton has built the town into an incredibly rich place, and filled it with so many people to care about. The old-fashioned language she uses along the way is great fun to read. When the book was over, I was sad to put it down. I recommend you set out for a visit of your own to Hokitika. Go there to be a detective, a time traveler, an astrologist, a gold hunter, and perhaps most of all, a humanist.

The Luminaries
by Eleanor Catton 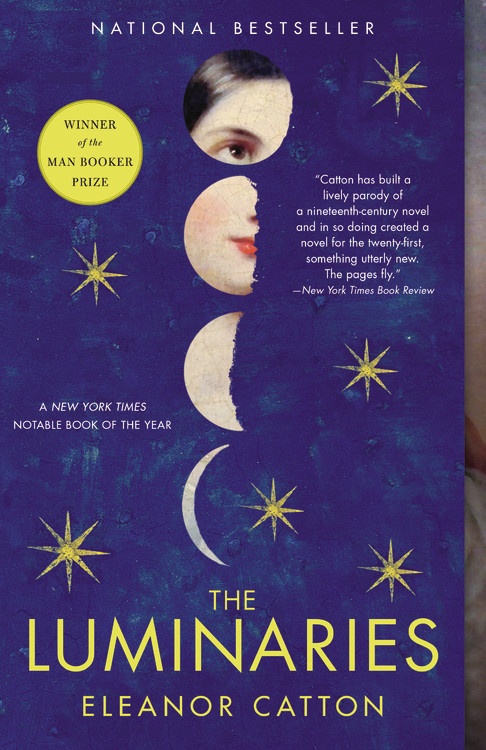 |+| Add to Your Shelf
The Luminaries
Eleanor Catton

We like big books and we cannot lie—we buy them, we shelve them, and we stare at them, promising that someday, when we have the time, we’ll read them. Winter is the perfect season for crossing some of those wonderful doorstops off your list.

A Rich and Remarkable Novel of Fates and Fortunes

Readers’ Choice: October’s 10 Most Shelved Books on Off the Shelf

9 Books I Can’t Stop Thinking About