In anticipation of the highly anticipated new novel THE MARS ROOM, and a beloved author’s rightful return to prominence, it seemed only fitting to revisit Rachel Kushner’s 2013 masterpiece, THE FLAMETHROWERS. In it, the two-time National Book Award finalist follows a young artist in her quest to discover her craft (and herself) in the unending art exhibitions that surround her.

Reno is a twenty-something woman in the mid-1970s, nicknamed after the city she hails from. We first meet her as she rides her motorcycle across Nevada to the Mojave Desert, to enter a land speed race. As she gears up for her solo time trial, we find she is not there to shatter any kind of record, but for her own personal art exhibition—capturing pure speed through the art of photography.

This is Reno. A woman of distinct artistic taste that is borne of instinct and nurtured by a bit of chaos. A brand of expression that is only solidified as she eventually makes her way to the East Coast and, of course, New York City. There she finds herself drawn to a subversive art scene, studying the landscape through eccentric friendships with fellow creatives and a romantic relationship with an older man named Sandro Valera.

Sandro, a more established artist himself, is the heir to the company Moto Valera, an Italian motorcycle manufacturer. In New York, he introduces Reno to his chosen art community—one that looks down on her and her unknown talents. But eventually, after much persuasion, Sandro brings Reno to his home in Italy, granting her the opportunity to travel with the Moto Valera race team.

Reno’s education continues in Italy when the Valera family offers new extremes of emotional expression in each hostile, and darkly funny, interaction. Between Sandro’s mother screaming at her eccentric lover and Reno’s presence being overshadowed by his cousin, Sandro’s home quickly becomes a battleground of personalities.

And matters only get more intense as the company—and the country as a whole—experiences a rebellious uprising from the under-represented poor working class. Amid fire-bombings and riots, the inner cities of Italy become rampant with violent radicals searching for oppressive elites to inflict “justice” upon. Reno pays witness to each strike against the establishment and captures it all on camera.

Kushner’s gift is bringing together a collection of personalities, stories, and emotions into a cohesive narrative. THE FLAMETHROWERS explores the seventies and its artistic explosion through vibrant depictions from a spirited character. A brilliant work of art itself, the book challenges what it means to be a literary novel, with thrilling writing that bursts off paper and leaves your fingers singed from turning the pages.

The Flamethrowers
by Rachel Kushner 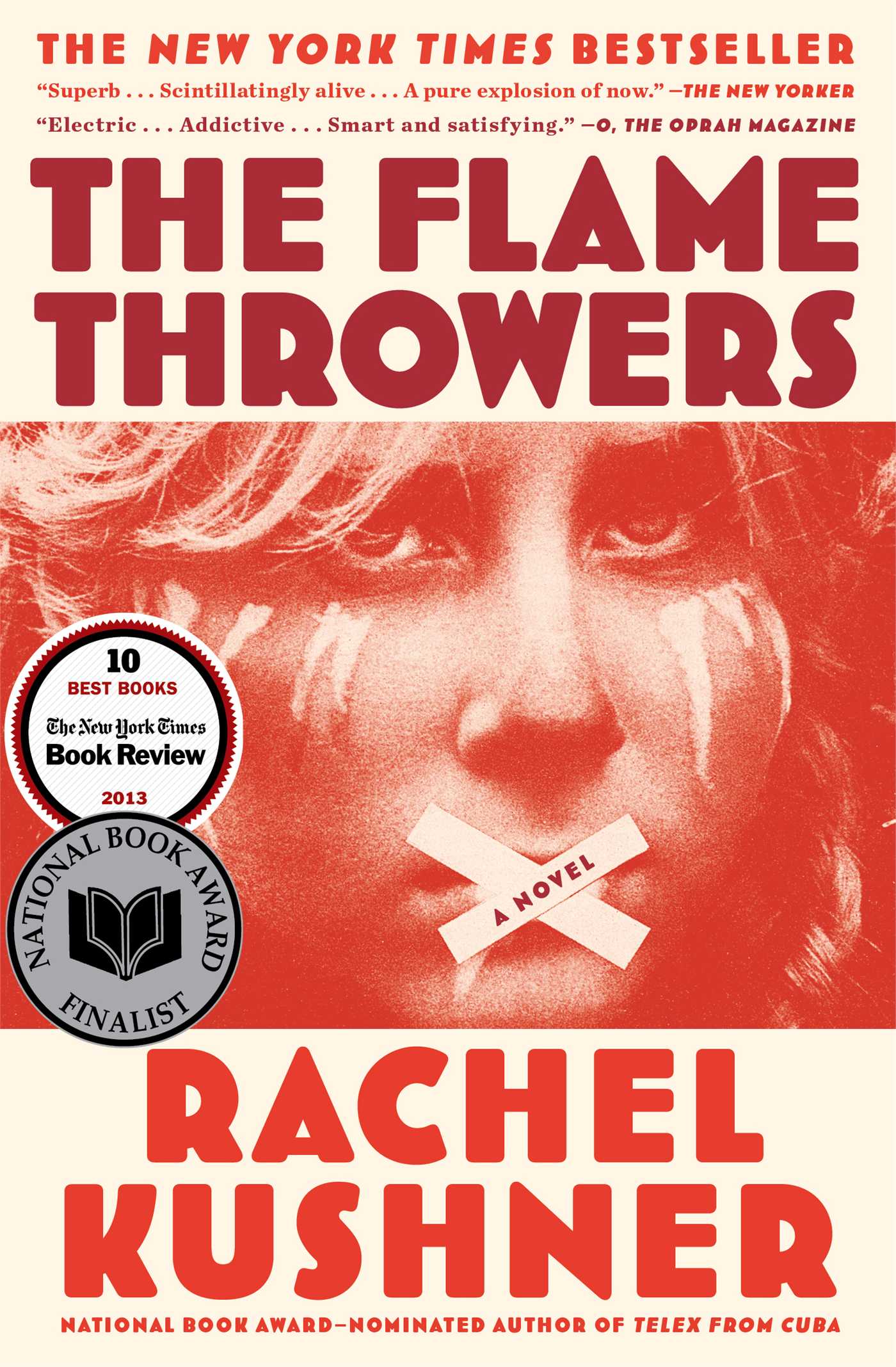 |+| Add to Your Shelf
The Flamethrowers
Rachel Kushner

An ambitious literary novel set in Rome, New York, and the desert of the American West in the late 1970s, The Flamethrowers captures the idealism and hypocrisy of art, politics, and violence. A National Book Award finalist and selected as one of the ten best books of 2013 by The New York Times, it confirmed Rachel Kushner’s emerging reputation as a writer of spectacular talent and imagination.