We all know that there are a gazillion World War II novels out there. From THE BOOK THIEF to ALL THE LIGHT WE CANNOT SEE to THE NIGHTINGALE to SARAH’S KEY, the list of fantastic books that explore the horrors, heartbreaks, intricacies, and moments of unbelievable courage during that period of our history goes on and on. But I’d never read one that challenged my preconceptions about the people who lived through that war like Ursula Werner’s THE GOOD AT HEART did.

The town where THE GOOD AT HEART is set looks, on the surface, like any small town during the war. You know this town. It’s a town where everybody knows each other. Everybody gossips about one another. The young men are off at war. The young women are restless. The older generation is sick of the fighting and loss. At a quick glance, the story has the makings of any World War II historical novel.

But this isn’t an Allied town. This town is Blumenthal, Germany, deep in Nazi territory.

At the heart of the novel is the Eberhardt family. Leading the family are Edith and Oskar Eberhardt, who moved everyone out of Berlin and into the German countryside to escape the bombings from Allied planes. There is their daughter, Marina, whose husband is away at war, and Marina’s daughters, Lara, Sofia, and Rosie. And there is Erich Wolf, the young man raised by the Eberhardts and trained as a commander in the Nazi army.

Even tucked away in an idyllic house that Edith has carefully cultivated to protect her family from harm, the Eberhardts cannot avoid the turmoil that is erupting around them—the turmoil that is in their own house. Oskar is not merely the kindly grandfather figure in this story: he also holds a privileged seat in Hitler’s cabinet. And the town’s pastor, Johann, is not just their spiritual adviser: he is helping to shepherd Jewish families out of the country in secret.

While Edith tries to turn a blind eye to her husband’s work, the disappearance of her Jewish neighbors, and the whispered rumors about what has happened to them, her daughter, Marina, takes a different stand. Appalled by what she hears, Marina challenges Oskar on his position and works covertly with Pastor Johann to hide the “packages” and smuggle them out of the country. And Erich, seemingly so straitlaced, is not only hiding an illicit affair with Marina, he is also involved in a secret organization that is seeking to overthrow the Nazi regime by assassinating the Führer.

And when the Eberhardts hear that the Führer himself is making a visit to Blumenthal for a concert and a social call to their own home, the family’s quiet existence is put in jeopardy and plans are set in motion that will shake up their lives forever.

Taking place over the course of three days, the book is at once tightly, anxiously focused on the arrival of the Führer and the tensions that will come to a head with his visit, and yet has an epic sprawl, covering three generations of experience. Powerful, utterly mesmerizing, and deeply personal, Werner’s perspective on World War II is a complicated one, which is what makes it all the more important.

Based on discoveries about the author’s great-grandfather, THE GOOD AT HEART asks the question, What do you do when the world you’re born into turns upside down? If you are not personally being threatened, do you stay quiet? Or do you do something to help? Delving into a reality before history condensed people into simply “heroes” and “villains,” Werner’s novel takes a town of ordinary people living their everyday lives and considers how much strength it takes to do what’s right—to resist everything you’ve been told to do and risk your own life to help those being persecuted. It may even have you asking yourself, Would I have been brave enough to do it?

The Good at Heart
by Ursula Werner 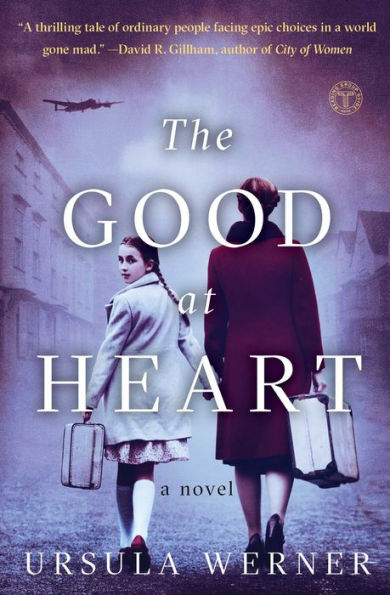 |+| Add to Your Shelf
The Good at Heart
Ursula Werner

What Do You Do When the World You’re Born Into Turns Upside Down?

You may also like these 12 Moving Novels of the Second World War.