A good book should draw you in right from the start. I’ve always felt that way, both as a reader and as a writer. There are simply too many good books in the world—and too little time—to spin our wheels delving into something that doesn’t hook us.

That’s why THE WEIGHT OF SILENCE by Heather Gudenkauf is still so fresh in my mind. The book starts with the seeds of a mystery, piquing the reader’s interest immediately. Who is the little girl the narrator is talking about? What’s she doing running through the woods in her nightgown? And why has she neglected to say a single word in the last three years?

But those breadcrumbs that Gudenkauf scatters for us don’t captivate on their own. What captured my attention from the very first sentence was the unusual choice to begin the story in the second person. “Louis and I see you nearly at the same time,” the novel starts, as the chapter’s narrator speaks about the mysterious little girl by talking directly to her. That sort of thing doesn’t often work, but by the time I’d read the first two pages, I was enthralled.

The girl in question turns out to be seven-year-old Calli Clark, and though the next chapter comes from her viewpoint rather than that of the initial narrator (who turns out to be her mother), we still don’t know quite why she doesn’t speak. The disorder is called selective mutism, and there are hints of a tragedy in her past, something terrible that stole her voice.

When Calli goes missing, along with her best friend, Petra, the story of their disappearance unspools alongside the story of why Calli stopped speaking. They’re separate stories on separate tracks, but it becomes increasingly clear that they are intertwined. But how? Calli is the only one who knows, and she’s not telling.

Gudenkauf played masterfully with different viewpoints and different narrative techniques in THE WEIGHT OF SILENCE, her 2009 debut novel. Since then, she has continued to deliver heart-pounding, narratively fascinating, family-centric thrillers, including NOT A SOUND, MISSING PIECES, and LITTLE MERCIES. But it is THE WEIGHT OF SILENCE that has stayed with me—and will continue to stay with me for a long time to come.

For someone who passes nearly an entire book without saying a word, Calli Clark, drawn so skillfully by Gudenkauf, still whispers in my ear, especially when I’m thinking about courageous, pitch-perfect ways to tell a story.

The Weight of Silence
by Heather Gudenkauf 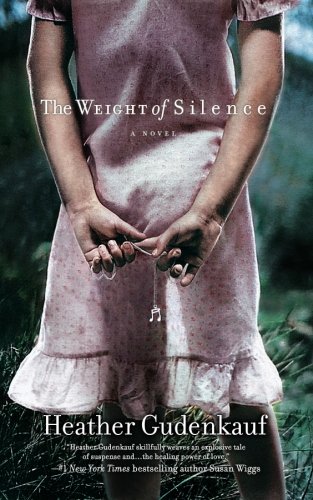 Notice: Trying to access array offset on value of type null in /home/offtheshelf/public_html/web/app/themes/ots/_inc/template-parts/books/book-modal.php on line 31
|+| Add to Your Shelf
The Weight of Silence
Heather Gudenkauf