Growing up in a small midwestern town, I learned early how to make my own fun. With nothing but our imaginations and our bikes, my cousins and I crisscrossed the quiet streets of our neighborhood and beyond. We would climb trees, pretend we were adventurous runaways, and wade through the creek in my grandparents’ backyard, excavating clay for homemade pottery. Ice cream cones and trips to the pool were highlights, but nothing was quite as exciting as the day the circus came to town.

The fairgrounds were directly across the street from my cousin Cara’s home, so we always knew when the trucks arrived. Fingers curled around the chain-link fence, we would watch as the tents were laid across the browning grass and then almost magically erected, their bright colors a siren call, a beacon. Within hours everyone knew that the circus was in town, and kids would drag their parents out of the sunlight and into the dark, mysterious interior of the main tent.

I am fascinated by the circus—the mystique and wonder, the sense of awe and delight. But there is always an underlying hint of danger, the understanding that everything is not quite as it seems. Maybe that’s why Leslie Parry’s CHURCH OF MARVELS is such a memorable read for me.

Set in the late 1800s in New York City, this captivating book chronicles the lives of several strangers whose paths become intricately entwined. There’s Sylvan, a night soiler (one of the young men charged with cleaning out public privies every night) who discovers an abandoned newborn baby; Alphie, a young newlywed who awakens to find herself in a lunatic asylum; and Odile and Belle, sisters who grew up amid the wonder of the Church of Marvels, their mother’s spectacular Coney Island sideshow. When the Church burns to the ground, taking Odile and Belle’s mother with it, the girls are set on journey that will change both of their lives forever.

Dark and atmospheric, CHURCH OF MARVELS chronicles the stories of a varied cast of engaging, complex characters. As their paths converge amid a backdrop of underground opium societies, insane asylums, the tough streets of New York City, and the enigmatic culture of circus sideshow performers, readers are swept up in an epic tale that is deeply satisfying. At the heart of the mystery is a group of lonely, broken people looking for love and a chance at redemption, and Parry’s gorgeous prose details their stories with sensitivity and grace.

I highly recommend CHURCH OF MARVELS for anyone who loves a compelling book with a little mystery and carefully drawn, luminous characters. It’s a story filled with enchantment that doesn’t shy away from the darkness that can shadow the human heart but still offers an astonishing glimpse at the beauty of hope.

“Life is uncommon and strange; it is full of intricacies and odd, confounding turns. So onstage we remind them just how extraordinary the ordinary can be.”

Church of Marvels
by Leslie Parry 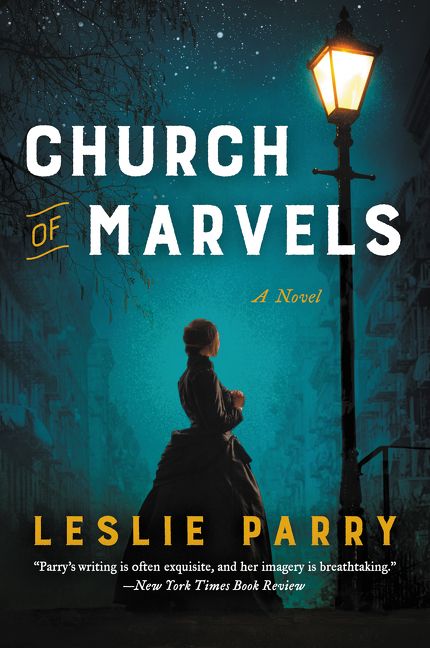 |+| Add to Your Shelf
Church of Marvels
Leslie Parry

This novel is set in vibrant, tumultuous turn-of-the-century New York City, where the lives of four outsiders become entwined, bringing irrevocable change to them all. Moving from the Coney Island seashore to the tenement-studded streets of the Lower East Side, to a brutal, terrifying asylum, this ravishing debut takes readers back to a city of hardship and dreams, love and loneliness, hope and danger.

Come One, Come All: 7 Circus Novels Not to Be Missed

The Circus Comes to Town in this Enchanting Novel—Don’t Miss It!