The figure of Mary, mother of Jesus, remains a powerful, resonating influence in today’s culture. She appears, of course, in the formal religious sphere, where she is fervently worshiped and praised. She serves as a fixture in the world of art—depicted in countless paintings and sculptures across historical art periods. And while all of these reflections uniquely capture Mary’s form, each seems to display the divine side of Mary: The Virgin Mary, the Mother of God.

Prolific Irish writer Colm Tóibín chooses to bypass that divinity and explore the pure humanity of Mary in his own artistic expression, THE TESTAMENT OF MARY. This powerful novel finds Mary in the ancient Greek town of Ephesus in the years following her son’s death. Here she lives quietly and contemplatively, but under the supervision of her two intrusive keepers: men who constantly ask her to recount her son’s final years for the purpose of inscribing them in Gospel form. As these men attempt to elucidate the last days of Christ’s life through interrogation, Mary recounts her side of the world’s most famous narrative.

Mary describes how she came to learn of her adult son and his growing following through the events considered “miracles.” In the recalling of a conversation with a cousin from Jerusalem, Mary learns of Christ’s complete healing of a crippled man—an action that both generates fanaticism in the common people and marks him a target for the Roman elites. Similarly, Mary bears witness to other phenomena such as the raising a local man, Lazarus, from the dead. Within each of these miracles, Mary is forced to confront tumultuous realities and ponder their influence on herself and that of the greater community.

What the reader discovers from these reflections is that Mary, at least at this moment in time, is still just a normal woman, filled with the fundamental emotions we all can relate to. She despises the “misfits” who sheepishly follow her son. She fears the consequences of disturbing the natural occurrence of death—even if it is to resurrect. She questions this mysterious, powerful man her once exuberant infant child has now become.

Most of all, she wonders why. Why has all of this has happened to her, and to her seemingly conventional family?

Tóibín captures the most honest expression of Mary seen in fiction. His lyrical writing style and emotional prose sheds new light on the most unique mother–son relationship in history. From start to finish, the novel paints a raw, convincing portrait of Mary’s true humanity, culminating in the novel’s breathtaking scene of Christ’s crucifixion. It is a bold, daring approach to depict Mary for the modern age, and one that succeeds on many levels. Simply put, THE TESTAMENT OF MARY is one not to miss.

The Testament of Mary
by Colm Tóibín 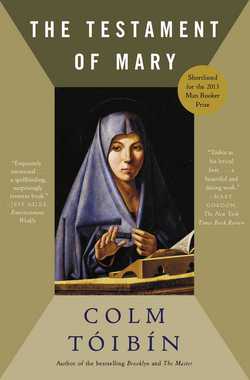 |+| Add to Your Shelf
The Testament of Mary
Colm Tóibín

Shortlisted for the 2013 Man Booker Prize and adapted into a Tony-nominated play, Tóibín’s provocative, haunting, and indelible portrait of Mary presents her as a solitary older woman seeking to understand the events that become the narrative of the New Testament and the foundation of Christianity. This woman whom we know from centuries of paintings and scripture as the docile, loving, silent, long-suffering, obedient, worshipful mother of Christ becomes a tragic heroine with the relentless eloquence of Electra or Medea or Antigone. Tóibín’s tour de force of imagination and language is a portrait so vivid and convincing that your image of Mary will be forever transformed. Audiobook fans won’t want to miss Meryl Streep’s reading of this stunning work.

A Daring Portrait of the World’s Most Famous Mother