Editor’s Note: A version of this piece first appeared in BLARB, the Los Angeles Review of Books blog.

The first memoir by Amy Krouse Rosenthal, who died on March 13 at age 51, uses the word “death” only once. I know this because the endpapers include a list: How Many Times Certain Words Appear in This Book. “Cool” appears 22 times, “really” 69, “awkward” and “weird” both six. “Love” gets 78.

ENCYCLOPEDIA OF AN ORDINARY LIFE is Amy Krouse Rosenthal’s 2005 memoir, which alphabetizes her thoughts and experiences to tell the story of her life, including lists, charts, and time lines. Years before social media exhausted the minutia of our lives, ENCYCLOPEDIA exposed the magic in the mundane. “I have not survived against all odds,” Rosenthal writes. “I have not lived to tell. I have not witnessed the extraordinary. This is my story.”

Reading ENCYCLOPEDIA is like making a new friend, entry by entry, truth by truth. Yes! I think, as I read how vending machines make her anxious and how she never writes down an order number. I also love butterscotch but never seek it out!

One line in “Lacy Undershirts” almost defines the book, and me, and perhaps even the whole of the human condition: “Being yourself seems like the most effortless thing in the world—duh, who else are you going to be? But it’s deceiving, tricky, a summons laden with meandering and failed attempts—and then at last, so wondrously simple.” I have never read a truer book, real in the way that I experience life, with all its contradictions and silliness and meaningful license plates.

When I came upon ENCYCLOPEDIA at 22, as a young writer, I didn’t know books could be funny and random and nonlinear. What’s more, I didn’t know that normal people could have memoirs. Like Rosenthal, my life has been lucky, if boring, and with ENCYCLOPEDIA, Rosenthal legitimized my own ordinary story. I didn’t need to backpack through India or start a multimillion-dollar business; I could have a job and friends and make small mistakes and have brief successes, and that all of it is worthwhile. It is okay to be ordinary.

And yet, Amy Krouse Rosenthal was by no means ordinary. Her “Modern Love” column in the New York Times that ran in March just days before her untimely death, “You May Want to Marry My Husband,” was featured on the Today Show and has drawn more than 4.5 million readers online. In a remembrance in Publishers Weekly, her longtime editor of children’s books says simply, “Amy Krouse Rosenthal was magic.”

And that’s the true genius of this book. An ordinary life can be just as rich and magical as any other. It is in the mundane—the “Handwriting,” the “Tuesday Night”—that we find our truest, most extraordinary selves. (Mine: I will sing karaoke at any opportunity and I spent much of my childhood not believing in dinosaurs.)

Our own lists of quirks and joys and sadnesses and failures are the beautiful things which connect us to one another. Rosenthal shared her extraordinary ordinary life, so that I could begin to find mine.

Encyclopedia of an Ordinary Life
by Amy Krouse Rosenthal 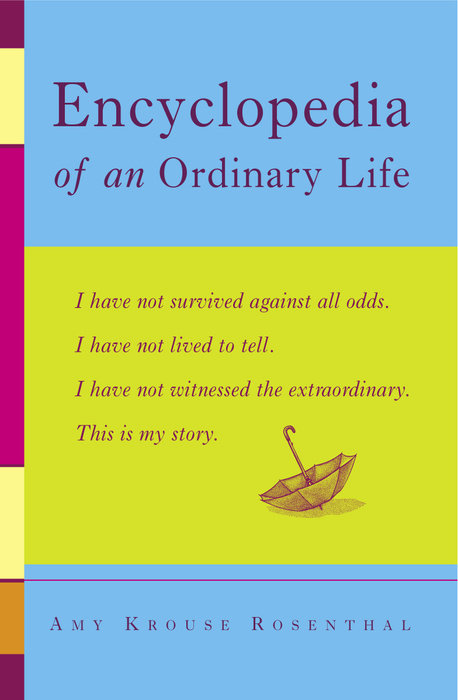