I am always intrigued by screenwriters who become novelists. Some can drown under the weight of what a fully-realized novel needs. Others flourish and spread their wings when given the chance to flesh out a full-length plot. Noah Hawley, the Emmy- and Golden Globe Award–winning creator of the TV show Fargo, falls into the latter category with his novel BEFORE THE FALL.

This Edgar Award–winning thriller opens with a small charter plane flying from Martha’s Vineyard to New York City crashing into the ocean. Passenger Scott Burroughs sputters and kicks his way to the surface of the ocean in hopes of surviving. (The description of his inner monologue in this scene is so vivid and adrenaline-filled that I have found myself thinking of it morning after morning when I do my laps in the pool). He finds a four-year-old boy, the only other survivor from the crash, and together, scared and exhausted, they make it to shore.

Sounds pretty straightforward as far as these plane crash stories go, right? Well, Hawley is not letting you off that easy. In a trick reminiscent of the flashbacks on the TV series Lost, Hawley spins the narrative and takes us back in time to give each character on the plane a chance to tell their story. We see what was going on with every person on that small plane, including Scott and four-year-old JJ, before the crash occurred. And the characters reveals themselves, you are connected to the present again through air traffic reports and newspaper articles of the plane being tracked, bodies being found, including where exactly they were found and in what condition.

BEFORE THE FALL becomes a page-turning whodunit as you are left trying to figure out why this plane went down and who was responsible. Many characters had motives, and trust me when I say you’ll keep changing your theory on who caused the crash until the very last page.

And I am happy to say that, yes, a special bond begins to form between the two survivors. It is equal parts sweet and sad, but it is a clever and necessary plot point in what could simply be a novel filled with destruction. There is rebuilding, there is reconnecting, and there is the bond of two people who went through something tragic together and trusted each other with the task of mending their heart.

If you loved THE WOMAN IN CABIN 10 by Ruth Ware, you’ll absolutely love BEFORE THE FALL. It’s perfect for a poolside read or while on a train out to the country, but you may want to check something else out for your in-flight entertainment.

Before the Fall
by Noah Hawley 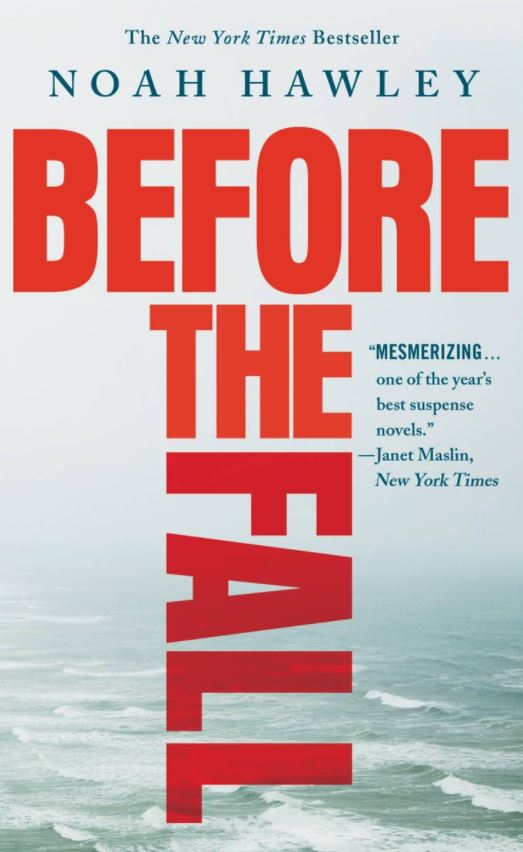 |+| Add to Your Shelf
Before the Fall
Noah Hawley