Part of being human is constantly trying to make sense of the world around us, no matter how strange it may be. We do this every day, rationalizing the actions of fellow commuters on the way to work or keeping a planner simply to know when we did what. But there’s something quite beautiful about the nonsensical that forces you to suspend rationality and simply take it all in. Nothing proves this more than Helen Oyeyemi’s devilishly whimsical and altogether riveting novel MR. FOX.

The novel’s eponymous protagonist, Mr. Fox, is a well-known writer who maintains a penchant for brutally murdering the female characters in his stories. Weary of the misogynistic violence, his imaginary muse, Mary, comes to life to stop his serial murdering. In the process, she threatens both his marriage and overall sanity.

Mixed into the novel’s overarching plot are beautifully reinvented fairy tales and comically grisly short stories, presenting a mosaic of short tales—from reimagined classics such as Blackbeard and Reynardine to various origin stories about Mary’s past. Over time, a love triangle between Mary, Mr. Fox, and his wife, Daphne, emerges, bringing to light weightier questions regarding love, violence, and looking beyond our imagination to see what’s right in front of us.

As a huge admirer of Helen Oyeyemi’s writing, I readily recommend any book from her backlist (especially BOY, SNOW, BIRD). But what makes MR. FOX so distinctive from Oyeyemi’s other works, as well as from anything else I’ve ever read, is its intricate blurring between reality and fiction which presents a narrative that fundamentally challenges what we deem possible. With her eclectic and beautifully written narrative, Oyeyemi removes the comforts of a linear plotline to instead immerse the reader within a dreamlike realm, doing away with many of the literary expectations that we are accustomed to.

The end result is a novel that feels like a world apart from our own, where fictional characters come alive to join us for lunch and fairy tales bleed into everyday connections. It demands to be read all at once, breathlessly taking in each vignette with little pause to futilely try to piece the stories together from their beginning.

I read this book while riding on the subway, sitting in loud coffee shops, and haphazardly walking down city blocks, each time quickly tuning out whatever was around me to instead plunge further into Oyeyemi’s richly detailed fantasy. Along the way I learned more about fairy tales of the past and their still relevant meanings for today, as well as the traditional confinements of literature that I have grown to naturally expect from being a lifelong reader.

MR. FOX ultimately dares you to throw caution to the wind, poignantly remonstrating on the importance of love and living freely while also adroitly constructing a strange, one-of-a-kind world that you’ll continually yearn to return to long after the last page. 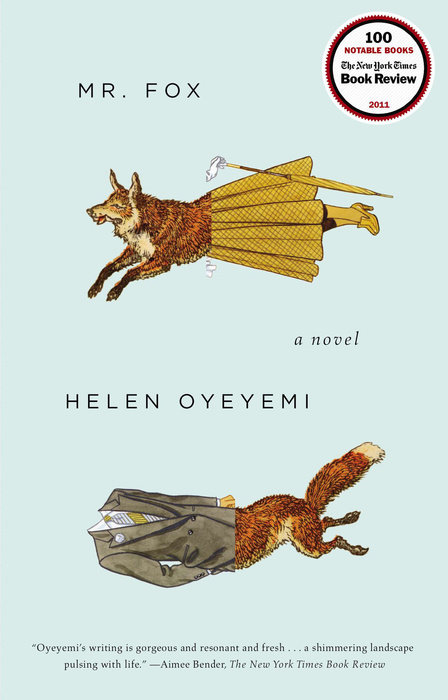