I was a teenager when I first read Octavia Butler and had recently begun rebelling against my mother. Deeply rooted in her Christian faith, she forbade me to watch certain movies, read certain books, or participate in certain activities. In her eyes, she was protecting me from temptation, showing me the path, and working toward keeping me focused on it. I, on the other hand, felt limited and emotionally abused. I wanted to read and watch everything she said would reserve me a one-way ticket to hell.

When I left home for college, I started asking questions without the guilt of being punished by The Almighty and fell in love with stories that challenged my perception of reality. I lived for the likes of Harry Potter, Underworld, and “Inception.” But I eventually noticed that none of the characters looked much like me. So I ventured on a new hunt to discover black science-fiction writers, and that is when I discovered Octavia Butler. To me, her literary imagination is filled with incomparable creative power.

DAWN is the first book in Octavia Butler’s Xenogenesis series, which starts when humans are no longer living on earth but instead are forced to make a life on a ship steered by aliens called the Oankali. By the end of the third book, the story has progressed many decades and forces its reader to imagine a world dominated by others.

Meet Lilith, a woman who wakes up in a strange white room with no doors or windows and later discovers she’s been abducted by an advanced alien race from an Earth dying at the hands of war. We are witnesses to Lilith’s confusion, apprehension, and fear as she is forced to adapt in a world with creatures who don’t claim a planet as home but instead travel through the universe seeking other forms of life to trade with. Imagine yourself in Lilith’s shoes for a moment: you are no longer at the top of the food chain; you are no longer the smartest being to cross the land.

As we learn about her abductors (or saviors, depending on your perspective), Lilith experiences a blow to her ego as she discovers the dearth of her knowledge about them. After all, it is a little embarrassing to discover your own stupidity. Butler writes, “You are hierarchical. That’s the older and more entrenched characteristic. We saw it in your closest animal relatives and in your most distant ones. It’s a terrestrial characteristic. When human intelligence did not even acknowledge it as a problem, but took pride in it or did not notice it at all . . . That was like ignoring cancer. I think your people did not realize what a dangerous thing they were doing.”

Part of Butler’s talent is being able to carve out space within the narrative for her reader to reside. If the story didn’t feel possible, I fear it wouldn’t have resonated with me so much. She taught me to visualize the makeup of family and gender differently. In the series, for example, it takes five biological people to make one being; the household is composed of male, female, and unisex persons.

DAWN breaks down what it means to be a creature of this world and others in simple terminology, but with the confidence to educate. Although the collection is almost thirty years old, the story confronts our present-day political climate in terms of what we can accomplish if we would simply work together. Butler writes that “[the Oankali] are not hierarchical, you see. We never were. But we are powerfully acquisitive. We acquire new life—seek it, investigate it, manipulate it, sort it, use it. We carry the drive to do this in a minuscule cell within a cell.”

Lilith, the feminine figure and lead character in the book, is black, strong, and yet emotionally fluid. The Oankali studied her long before choosing her role in their colonization of acquiring human cells while attempting to save humanity. The characters woven throughout are multicultural, of all shades and experiences. DAWN is a true joy to spend time with; so much so that you might find yourself devouring the entire Xenogenesis series. 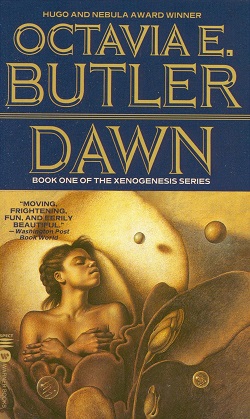