While the circumstances of my own life aren’t much like those of Aaron, the main character in Lori Ostlund’s AFTER THE PARADE, I was amazed at how clearly I understood him, and how relatable he seemed to be. I found myself both nodding along with Aaron’s observations about people and at the same time feeling astonished at how astute his observations were.

AFTER THE PARADE draws you in quietly, highlighting the story’s reserved protagonist and the physical and emotional distance he keeps between himself and the world. It opens as Aaron packs a U-Haul and leaves Walter, his partner of 20 years, to move from their home in Albuquerque to San Francisco. There, Aaron rents a tiny apartment in a garage and gets a teaching job at a barely functioning ESL school.

As Aaron adjusts to his new surroundings and to life without Walter, the narrative shifts between the two parallel stories of his youth and his present. Aaron was a deeply isolated child, and over the course of the novel, we see the troubling elements of his past that have led him to grow into an equally isolated adult: his father’s abuse, his mother’s sadness, the classmates who never understood him, the family and neighbors who kept their distance.

There are so many small, incredible moments in this book. Some grabbed my attention because they were familiar, like when, as a child, Aaron imagines that his bed is a boat in a storm. Others made me pause because they were so surprising, like when Aaron muses that discovering all the parts of a building that are broken is an intimate experience, “like getting to know the flaws on a lover’s body.”

Some moments managed to be both familiar and surprising: at one point, Aaron bursts into tears at the local diner as he hears the news that one of the regulars, whom he has observed but never spoken to, has died. Again and again, I was astounded by how unexpectedly complex these descriptions were, and how true to life.

The people that Aaron feels most connected to as a child are some of the loneliest and most outcast people he knows. There’s Clarence, a handicapped dwarf who has become disillusioned with humanity; there’s Bernice, an overweight young woman who keeps Aaron company in difficult times and eventually opens up about her own demons.

Aaron is an introvert who believes in boundaries. He seeks out restaurants where no one recognizes him, doesn’t share details of his life with his students, avoids using the telephone whenever possible. He is repeatedly surprised at people who are comfortable exposing the most personal aspects of their lives to strangers. In fact, throughout the book Aaron witnesses many examples of highly private moments that have accidentally or intentionally become public: sexual acts, bodily functions, extreme domestic violence, and loud, vicious arguments.

He is both fascinated and repulsed by these incidents, ever aware of his own guarded approach to the world. When a man he has met by chance asks him out, Aaron’s fears about the date align themselves with his deeper fixation on the limits of intimacy. Ultimately, he must try to reconcile these anxieties in order to form closer, more satisfying relationships.

We’ve all experienced failure to connect with others at some point, and we know, as Aaron does, that you can feel alone whether you live in a tiny town or a sprawling, populous city. If you’ve ever felt like an outsider, if you’ve ever felt nervous about becoming close with someone, you may find something sympathetic and reassuring in this novel’s thoughtful, solitary protagonist. I certainly did.

After the Parade
by Lori Ostlund 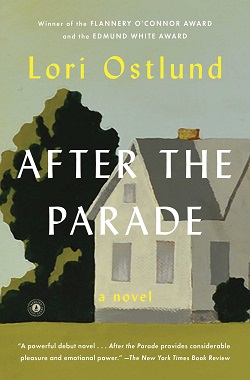 |+| Add to Your Shelf
After the Parade
Lori Ostlund

Readers’ Choice: The Top 10 Books on Off the Shelf Right Now

A Strange and Wonderful Novel for Introverts and Outcasts