I love reading novels with dysfunctional characters. Something about their utter inability to get it together makes me feel so much better about my own moments of ineptitude. I may have accidentally forgotten to pay my electric bill last week, but I’ve never been so overwhelmed with responsibility that I disappear on my family like Bernadette in Maria Semple’s WHERE’D YOU GO, BERNADETTE. Sure, I’ve embarrassed myself after a drink too many once or twice, but I certainly haven’t squandered an entire inheritance after a drunk driving accident like Leo in Cynthia D’Aprix Sweeney’s THE NEST.

And I may be a poor twentysomething trying to make it in New York City, but I’m so glad I’m not a grad-school dropout living at home and unable to face reality like Cal in Kris D’Agostino’s THE SLEEPY HOLLOW FAMILY ALMANAC.

To add to his distress, Cal learns the truth about his family’s poor financial state. Cal’s father is a mortality-obsessed pilot unable to work while battling a life-threatening cancer. His mother is spreading herself thin trying to keep the house from foreclosure after the medical bills have drained their savings. Much to Cal’s annoyance, his successful older brother, Chip, who has also moved back home, contributes generous paychecks from his job in the city, but can only help so much. To top it all off—Cal’s younger teenage sister confides in him about her unplanned pregnancy.

Cal is overwhelmed and frustrated with his life—one he never envisioned for himself—and is wrestling with adult problems that seem unsolvable. But after an unfortunate accident involving killing a deer in the forest, Cal finally realizes he isn’t helpless. Maybe, just maybe, he can be the catalyst for change that his family desperately needs.

For me, the best part of this book is the characters. Perfectly flawed, Cal and his family are just as endearing as they are exasperating. They feel more like people you might have met in real life than characters from a book. I want to pull my chair up to the Moretti dinner table and laugh along as the family banter envelops the room in that warm feeling of total acceptance and unconditional love.

While played for laughs (of which there are many) on the surface, this family’s ability come together in a time of need instilled in me a renewed sense of hope. It made me feel like everything in life is going to work itself out. It also prompted me to text my family’s group message and thank them for being relatively functional.

This is a book about how to get back up when life repeatedly knocks you down, about finding the strength to just keep going. It’s about learning which parts of life we can control and which we can’t.

For more of D’Agostino’s brilliant and comedic family drama, check out his newest novel, THE ANTIQUES. 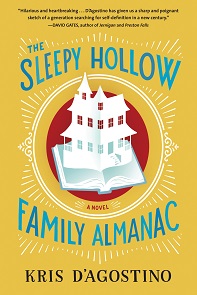