I bought BAD FEMINIST in a bookstore in Woodstock on November 6, 2016. The lady behind the counter smiled and slipped a “Pussy Grabs BACK!” sticker in the bag with my receipt. I smiled back, as if to say “We got this!” and skipped out of the store clutching the bright pink book across my chest. When I opened BAD FEMINIST on November 9, the day after the election, I dove into Roxane Gay’s writing, wrapping it around me piece by piece like armor.

BAD FEMINIST is both deeply personal and utterly universal. It is, of course, about feminism and the raft of issues that any discussion of feminism brings along with it, but in Gay’s hands it is much more. She unpacks misogyny and racism with the same keen eye she turns to the pop-culture signifiers of 2014. She pulls no punches in her critiques of phenomena like FIFTY SHADES OF GREY and THE HELP, or in her essay addressed to “young ladies who love Chris Brown so much they would let him beat them.”

Gay is “like most people, a mass of contradictions.” It is these contradictions that make BAD FEMINIST so compelling and such vital reading. Gay is not a perfect feminist by any means, and she doesn’t claim to be. She questions and self-examines, and “leans in” (to borrow from the subject of her penultimate essay) to the messy, blurry things that make us all human. She acknowledges that despite its misogyny, “Blurred Lines” is a damn catchy song and “Law & Order: SVU” is truly addictive television. Pink is her favorite color, and she reads Vogue unironically.

Her writing is sharp, funny, and smart, but also achingly moving. In one of her most powerful and haunting essays, “What We Hunger For,” Gay writes about the devastating trauma of sexual assault and the strength of one of her favorite fictional heroines, Katniss Everdeen (she is Team Peeta, by the way, and she can’t fathom any other option). Gay writes of Katniss: She is “fierce and strong but human . . . she is brave but flawed.”  She loves THE HUNGER GAMES because it offers, despite everything Katniss endures, hope for a better world.

She might be a “bad feminist,” but she is deeply committed to feminism, and really she just doesn’t want to be treated like shit for being a woman. BAD FEMINIST reminds us “Nasty Women” we must fight like hell, embrace our flaws and contradictions, and hope that, like Katniss, there is a world beyond where it gets better.

Mia Abrahams is an editor in New York City. 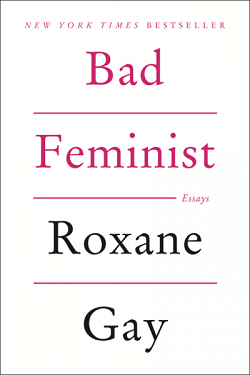 In these sharp, funny, and insightful essays from one of the most-watched young cultural observers of her generation, Roxane Gay takes us through the journey of her evolution as a woman of color and comments on the state of feminism today. The portrait that emerges is not only of an incredibly insightful woman continually growing to understand herself and our society, but an inspiring call to arms of all the ways we still need to do better.