MRS. BRIDGE is one of those books that writers love to pass along to other writers, although there’s nothing difficult or “writerly” about it: it’s funny, even hilarious, and written in fleet, nimble, sparely elegant prose. I forget who urged me to read it first—I remember a classmate in grad school raving about it—but my near-instant infatuation with the book had to do with marijuana.

More specifically, the pot plants my older brother grew on his windowsill all summer, when he was a weed-dealing teenager, and which he told my Wisconsinite mother were “Malaysian ferns.”  Even I, an unworldly eight-year-old, could tell they weren’t ferns. But my mother bought into it wholeheartedly, and according to my sister even gave a spirited defense of their fern-ness when a neighbor spotted the enormous plants from our swimming pool.

“Those don’t look like ferns,” the neighbor reportedly said.

“They’re Malaysian,” my mother said, with a hint of condescension.

As soon as I started reading MRS. BRIDGE, Evan S. Connell’s comedy of Midwestern manners, I recognized my mother.

Mrs. Bridge—her first name, India, is mentioned in the very first sentence and then rarely referred to again—is the matriarch of an upper-middle-class Kansas City family in the 1930s. She’s classist, racist, and obsessed with conformity and the superficial details of propriety. If you think of plot in the conventional Big Event sense, almost nothing happens in the book. And yet by the end of its 240 pages, Connell achieves something damn near impossible: his satiric portrait of Mrs. Bridge becomes, almost imperceptibly, deeply sympathetic. Without feeling in the slightest bit ponderous, it takes on the weight of tragedy.

I think this is why it appeals so much to writers: it doesn’t feel “written” so much as effortlessly breathed onto the page. Structurally, it’s nearly avant-garde.  It has 117 chapters, some of them only two or three paragraphs long. Many of these chapters have the structure of metaphysical jokes: something threatens Mrs. Bridge’s set of bourgeois pieties, brings her to the brink of understanding—a recognition that the very things she purports to cherish in life, and which supposedly give it meaning, are the things that imprison her and make her secretly miserable—but then the truth is yanked away, like a dollar bill on a string. That Mrs. Bridge is often the one doing the yanking, keeping the truth from herself, is what makes the book so tragic.

In probably the most famous chapter—and to me one of the greatest scenes in American literature—Mr. and Mrs. Bridge go to their club to have dinner and are threatened by a tornado. Everyone else dining at the club seeks shelter in the basement, but Mrs. Bridge remains at the table so that her husband can finish his steak, literally risking her life so as not to disrupt their routine. But she’s also showing her devotion to her husband. It’s utterly insane and deeply touching at the same time.

The novel embraces a similar contradiction: it manages to be a scathing indictment of American conformity, complacency, solipsism, and moral cowardice while also showing great compassion for the wonderfully particular American who’s guilty of these things. It’s something of a miracle, and seems to me like the perfect novel to read in 2017. 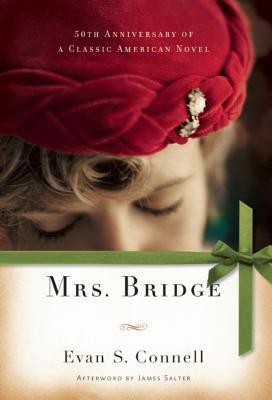 “The novel is comprised of vignettes, images, fragments of conversations, events—all building powerfully toward the completed group portrait of a family, closely knit on the surface but deeply divided by loneliness, boredom, misunderstandings, isolation, sexual longing, and terminal isolation. In this special fiftieth anniversary edition, we are reminded once again why MRS. BRIDGE has been hailed by readers and critics alike as one of the greatest novels in American literature.” —Eric Puchner, author of LAST DAY ON EARTH

Readers’ Choice: The Top 10 Books on Off the Shelf Right Now