I finished Kent Haruf’s absorbing, finely crafted novel OUR SOULS AT NIGHT in tears. It had pierced my heart, where there are no words. To my husband’s bewilderment, all I could manage was wow, wow, wow. I wish I could write like that, I said. I wish my stories could make readers cry.

The story unfolds in the fictional town of Holt, Colorado, where Haruf’s earlier novel, PLAINSONG, was set. From the first page, the fresh breeze of a distinctive, clear voice wafted through me. I welcomed a break from the hard-edged, twisty psychological suspense novels I’d been devouring. I was in the mood for a lightweight read, but Haruf’s spare prose is a deception, subterfuge. His gentle lullaby lured me in, keeping me comfortable and complacent before delivering a powerful emotional wallop that I didn’t see coming—a punch to rival any plot twist in any thriller.

At the outset, 70-year-old widow Addie Moore makes a surprising proposal to her neighbor, Louis Waters, a 70-year-old widower. She asks him to spend nights with her in bed, just talking, since they are both alone. Louis agrees with some trepidation—and excitement. What follows is the engaging story of two isolated people finding solace in each other’s company, falling in love, sharing memories and reflecting on their lives—their joys, regrets, fears.

Here, Haruf revisits the theme of finding family in unlikely places—making family when the people who were once our family have died, rejected us, or are simply unable to love. When Addie’s six-year-old grandson comes to stay, the bond between Addie and Louis deepens. But even as Haruf captures the nuances and emotional complexities of each character without judgment, many of their neighbors are not as permissive. When the town notices Addie and Louis’s unconventional arrangement, tongues wag and certain closed-minded people set out to sabotage the bonds of happiness and companionship between them.

OUR SOULS AT NIGHT is a deceptively benign story that is, in fact, a searing indictment of the cruelty humans are capable of inflicting upon those they are supposed to love. Haruf makes a quiet plea for compassion, for us to allow one another the freedom to love and be loved on our own terms.

The New York Times aptly noted that Haruf’s “great subject was the struggle of decency against small-mindedness,” and I would carry that observation a step further. I would argue that Haruf’s great subject was the very nature of our existence: How do we maintain our humanity against the forces of destruction? I wanted to tell Mr. Haruf how profoundly his story moved me, but sadly, he passed away in 2014, before OUR SOULS AT NIGHT—his final, beautiful literary swan song—ever made it to print.

Our Souls at Night
by Kent Haruf 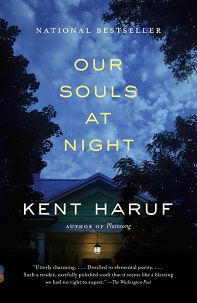 |+| Add to Your Shelf
Our Souls at Night
Kent Haruf

Seventy-year-old widow Addie Moore makes a surprising proposal to her neighbor Louis Waters, a 70-year-old widower. What follows is the engaging story of two isolated people finding solace in each other’s company, falling in love, sharing memories, and reflecting on their lives—their joys, regrets, fears.

Read our review of OUR SOULS AT NIGHT here.