When I look back at my teenage self, with my ill-advised bangs and strange affinity for glittery blue eyeliner, I remember both the highs and lows of growing up. There were hilarious adventures with friends and moments of intense loneliness in which I felt unsure of who I was. I’ve done my fair share of growing up since then, and I still have a little way to go, but reading Caitlin Moran’s coming-of-age story HOW TO BUILD A GIRL instantly brought back all the memories that I had somehow managed to forget.

In HOW TO BUILD A GIRL, the reader follows 14-year-old Johanna Morrigan over three years, beginning in 1990, as she reinvents herself to create the persona she believes will make her happy. Johanna starts off as the girl who is obsessed with Sylvia Plath’s THE BELL JAR and dreaming of the day in which she can begin a glamorous, adult life filled with cigarettes and late nights in big cities.

In reality, Johanna remains self-conscious of her chubby appearance and lacks the confidence to function well in social situations. In moments of anxiety, hilariously enough, she quotes the musical Annie. After an embarrassing incident on local television, during which she does an unsolicited yet passionate impression of Scooby-Doo, Johanna becomes the laughingstock of her town. Faced with excruciating humiliation, she decides that she must take action if she ever wants to experience adventure and finally kiss a boy. Thus she begins her comical new life as Dolly Wilde, music reviewer and lady sex-adventurer extraordinaire.

Throughout her hijinks and missteps, Johanna embodies the universal teenage girl experience: struggling to reconcile pleasing others with pleasing herself. Moran, by detailing Johanna’s stumbles, does a stunning job in forcing the reader to remember their own histories, from first loves and first drinks to that first painstakingly awful heartbreak. I often empathized with Johanna, all too aware of how it feels to sit in your bedroom wallowing over an unrequited crush or to enter a party and be suddenly overcome with nervousness, searching for the right thing to say.

What emerges as the most poignant, and ultimately relatable, moment in HOW TO BUILD A GIRL occurs when Johanna realizes that, by forcing herself to become a cool girl who viciously reviews bands and gets drunk without a care, she just might have lost part of herself. In the end, there is no right way to build a girl, as Moran deftly notes: “This is the work of your teenage years—to build up and tear down and build up again, over and over, endlessly, like a speeded-up film of cities during boom times and wars.”

Just as Johanna emerges a young woman conscious of who she is and what she wants, readers are left thinking back on their own journeys and the decisions that have guided them. I finished the book with the recognition that, although I will always lovingly remember my 16-year-old self, I am very, very happy to be the woman I am today.

How to Build a Girl
by Caitlin Moran 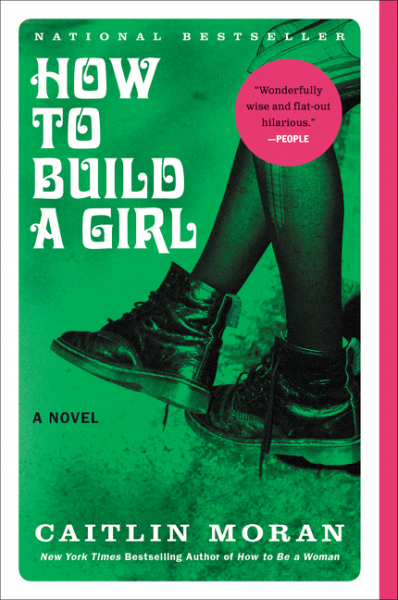 |+| Add to Your Shelf
How to Build a Girl
Caitlin Moran