You may say there is no such thing as a perfect book. You’re probably right. But the one book that comes closest to it, in my mind, is SO LONG, SEE YOU TOMORROW by William Maxwell. If you’ve not read it, you should. Immediately.

Now, like all intimations of paradise, it came upon me unawares. I was in a bookstore and there on a table, among all the tomes and gaudy bestsellers, was an incredibly thin book. I’ve always liked thin books. You’re in, you’re out, you’re on to something else. But this book also had a beautiful and portentous black-and-white cover—a cloud-filled sky dwarfing a lonely farmstead.

So of course I picked it up, scanned the first page, deemed it readable, plunked down my few dollars, took it home, and was forever changed.

SO LONG, SEE YOU TOMORROW is the reminiscence of an old man coming to terms with a single, violent event that took place in his youth. On a winter morning in the 1920s on a farm in rural Illinois, a man was killed. Now, 50 years later, he is trying to reconstruct the events that led up to that loss. But his memories of this event and its repercussions lead him on a journey of recollection and imagination that reveals not only the lives of Maxwell’s characters, but the very essence of what it means to be human. At the same time, it is a meta-commentary on the act of writing itself, on the limits of memory and history, and on the question of meaning,

It is a story about family, love, betrayal, and murder told in multiple voices, including the family dog’s.

The writing is what they call “spare,” if by spare you mean getting to the very heart of something with the minimal number of keystrokes. It is, without a doubt, the most poetic book I’ve ever read without one word of poetry.

I imagine you will be as awestruck by the artistry as I am, but more importantly, you will enjoy every moment of this book.

There is a personal addendum. William Maxwell was a famous editor at The New Yorker from 1936 to 1975, where SO LONG, SEE YOU TOMORROW first appeared, but I had not heard of him until I stumbled upon his book. Some years later I was staying at my agent’s house where I found another little William Maxwell volume called THEY CAME LIKE SWALLOWS. On the cover was a vintage photo of a boy in a sailor suit, taken, as it happens, by my agent’s great grandfather. And the boy in the picture is my agent’s grandfather.

And so the connections to the past, imagined and real, that fascinated Maxwell also connect me to him and set me off on my own journey of imagination.

So Long, See You Tomorrow
by William Maxwell 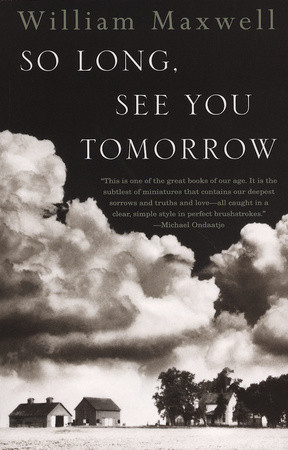 |+| Add to Your Shelf
So Long, See You Tomorrow
William Maxwell

Fifty years after a murder on a rural Illinois farm, a man tries to reconstruct the events and is inevitably drawn back to his childhood friend, whose father was the murderer. Out of memory and imagination, the surmises of children and the destructive passions of their parents, William Maxwell creates a luminous American classic of youth and loss.