For the well-versed bibliophile, nothing feels quite the same as stumbling upon a book that you feel personally connected to, whether it’s because you’ve been to the city where the story takes place or because you see yourself reflected in the protagonist. I often choose novels simply because they were set in my hometown or have a character who shares my name. So, as a second-generation, biracial Chinese American, I felt all the more drawn to Celeste Ng’s breathtaking debut novel EVERYTHING I NEVER TOLD YOU, which details a mixed-race family in the 1970s after the mysterious death of their seemingly perfect middle child, 16-year-old Lydia Lee.

It would be impossible to classify EVERYTHING I NEVER TOLD YOU as simply a mystery novel about Lydia’s death—a true testament to Ng’s adeptness at creating complex narratives that read like a breath of air, albeit one that will simultaneously make the reader gasp and crave for more. The novel captivates from the beginning with its concise, yet poignant opening: “Lydia is dead. But they don’t know this yet.” And, as Ng slowly unfolds the story, the reader becomes all the more desperate to find out just what happened that night in May when everything changed.

But, beyond Lydia’s death, at the heart of the story is the Lee family itself, and the struggles they encounter as a mixed-race family in small-town Ohio. Ng gracefully shifts between time periods, weaving together the experiences of each family member to present a complete picture of the Lees, from the beginning romance between Lydia’s parents—the ambitious, blonde-haired Marilyn and the self-conscious loner James—to the fractured and grief-filled months after Lydia is gone.

In many ways, the Lee family of EVERYTHING I NEVER TOLD YOU is not much different from my own (in fact, my father is also a first-generation Chinese American named James Lee, and my green-eyed, blonde-haired mother has always been the most determined person I know). But what sets them apart, and what Ng describes so masterfully, is that they lived in a different time, one much more narrow-minded and traditional than the world I grew up in. The Lees must constantly face questions of identity and assimilation, which the three children, Nath, Lydia, and Hannah, attempt to come to terms with, to ultimately mixed results.

EVERYTHING I NEVER TOLD YOU remains, from beginning to end, a story of the ways in which tacit sentiments and secrets build up over time until it’s too late. It’s a tale not only of the words left unsaid but also the words that will never be uttered after someone is gone. You will finish the book with a greater appreciation of your loved ones, as well as a desire to hold them just a little bit tighter.

Everything I Never Told You
by Celeste Ng 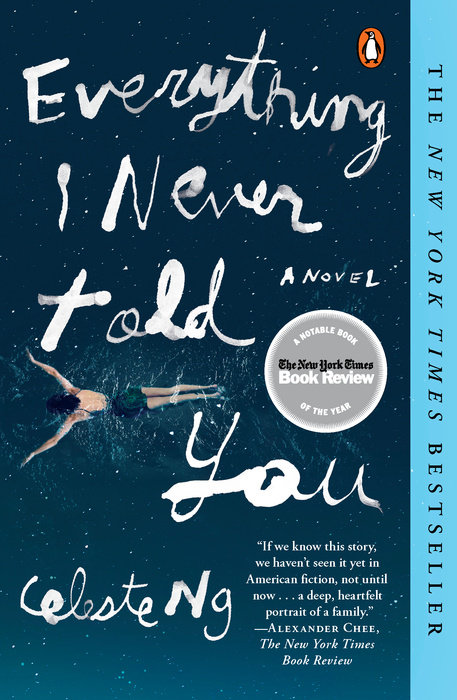 |+| Add to Your Shelf
Everything I Never Told You
Celeste Ng

“Lydia is dead. But they don’t know this yet.” So begins this dark but exquisite novel about a Chinese-American family living in 1970s small-town Ohio. Lydia is the favorite child of Marilyn and James Lee, but when her body is found in the local lake, the delicate balancing act that has been keeping the Lee family together is destroyed, and the family is forced to come to terms with their struggles and secrets.

Beat the Heat With These Summer Book Club Picks