When I was a senior in college, I wanted to try something different. Experiment, if you will. I was 20 years old, at a liberal arts college. No parents! No consequences! I was going to rebel, I was going to rage against the machine, and break away from all the traditions I had been raised in. I was going to finally do the one thing I had always wanted to do.

I was going to read Neil Gaiman.

I’m a very ambitious reader, but I’ll admit that for some time, Gaiman’s books had intimidated me—especially his much-loved AMERICAN GODS. It was an epic, a book that spanned place, time, people, and genre. It was also a book a close friend continued to recommend, which is always an encouraging and terrifying situation to be in. I was worried that I would hate it, and that somehow one book would unravel a very pleasant four years of friendship (#bookwormproblems). But he made the case and off to spring break I went, with that iconic blue book in my bag.

Pro tip: listen to your friends when they recommend a book. Just do it.

AMERICAN GODS centers around a man named Shadow, who in the first few pages is released from prison after he receives the news that his wife and best friend have been killed in a car accident. Unsure of what to do next, he goes to work as a driver and bodyguard for a mysterious man named Mr. Wednesday. The two embark on a road trip across the United States at Wednesday’s request, and make stops along the way that bring a host of eccentric characters into Shadow’s orbit.

Soon, it becomes apparent that these people—the Zorya Sisters, Mr. Ibis, Mr. Nancy, John Chapman, and others—are different. They seem to know things, to have certain abilities and experiences. That, Shadow discovers, is because they are not people (or at least, not really). They are the gods of the old worlds, brought to America by immigrants over the years and still among us because people still believe in them. And, we learn, Wednesday is recruiting them for a battle against the new order, the “American Gods,” manifestations of technology, the internet, and our modern belief systems.

It might be easy for some (it was for me) to initially dismiss AMERICAN GODS as a fantasy novel. Don’t. It’s more than that. Part mystery, part mythology, part contemporary criticism, it does what the best novels do: provide a timeless commentary on the way we live and interact with one another. It’s one of those special books that appeals to a wide range of readers, all of whom have different opinions about it. Look at my origin story with it. As a non-Gaiman reader I took a chance on something new because I wanted to understand my friend’s connection to it—and guess what? When I sat down in my beach chair the first day of the trip and pulled out my book, two of my friends did the same. He’d converted (no pun intended) all of us.

AMERICAN GODS is a meditation on religion, literature, justice, love, and redemption. It draws attention to and celebrates where we come from and what we take with us when we start a new life elsewhere. The last pages especially will leave you breathless. While there is conflict between the old and new ideas and not everyone escapes unscathed, the book ultimately delivers a message of understanding, acceptance, and the need to unite under something greater than ourselves.

In short, it is quintessentially American. And now, more than ever, it is important that we read it. 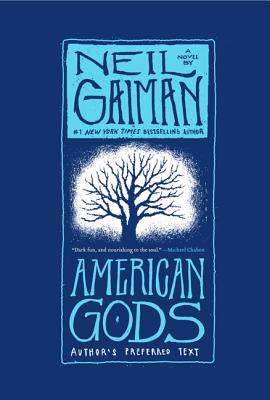 A master of inventive fiction, Neil Gaiman delves into the murky depths where reality and imagination meet. Now in American Gods, he works his literary magic to extraordinary results. Winner of the 2002 Hugo Award, Nebula Award, and Bram Stoker Award, American Gods is one of Gaiman's landmark works. Shadow dreamed of nothing but leaving prison and starting a new life. But the day before his release, his wife and best friend are killed in an accident. On the plane home to the funeral, he meets Mr. Wednesday—a beguiling stranger who seems to know everything about him. A trickster and rogue, Mr. Wednesday offers Shadow a job as his bodyguard. With nowhere left to go, Shadow accepts, and soon learns that his role in Mr. Wednesday's schemes will be far more dangerous and dark than he could have ever imagined. For beneath the placid surface of everyday life a war is being fought—and the prize is the very soul of America.