My father used to say his dream was to be a hermit in the woods. No cell phone, no emails, no text messages fluttering through the ether demanding his attention and response. Just a cabin and quiet. Howard Axelrod’s 2015 memoir, THE POINT OF VANISHING, captures my father’s idyllic dream.

After a freak accident in college permanently blinds Axelrod in his right eye, he needs a drastic change in order to process his new perspective. To do so, he moves into a ramshackle cabin miles off any beaten track and spends the next two years alone, without any substantive contact with the outside world.

The move seems drastic, but Axelrod is on a desperate mission to learn how to see a world that is, for him, forever altered. As he struggles with inner quiet and how to be content in solitude, his careful reflections about isolation reveal a thoughtfulness and vulnerability that make his unique experience relatable to anyone trying to navigate change in their life. “So much of loneliness,” he muses, “was social envy, the desire to be included, but with no prospect of being included, that layer of loneliness sifted away.”

His time in the cabin is interspersed with memories of the period immediately following his accident and graduation, when he received a fellowship to travel and study in Italy. He falls in love with a girl from Vienna who teaches him how a changed vision may still be one worth exploring. Milena is one of a colorful cast of characters; for a memoir grounded in seclusion, these flashes of personalities and skillful portraiture (the mother and daughter duo from a nearby town, the gruff local who sells firewood) are timely reprieves from his introspection.

Toward the end of his sojourn, Axelrod makes a rare visit to the outside world for Thanksgiving. He hasn’t noticed how deeply ingrained his quiet and measured lifestyle has become until his environment shifts to highways, shouting relatives, constant questioning, and close physical proximity. Watching his family around the dinner table, he marvels at how “they were a bunch of demigods, capable of doing a thousand things at once.” This change in environment is jarring, but also prompts the reader to reevaluate their own fast-paced world. How often do you do too many things at once? When are you actually listening to those around you or watching the world go by?

Shortly after moving into the cabin, Axelrod reflects on how a brain constructs reality from perception, thinking, “If everyone’s reality included blind spots, if that was simply the nature of perception, and my own perception was constantly being reminded of its blind spots, wasn’t I seeing more than most?” He concludes the thought with his ultimate mission: “To think I’d been given a way of seeing, or not seeing…if only I could figure out how to use it.”

This, for me, was the most profound takeaway from THE POINT OF VANISHING. The lesson is not a desire to remove yourself from the world, or limit society, or even escape your phone—it’s to learn how to recognize what your brain does not see, how it impacts your existence, and how to turn your blind spots into a strength.

The Point of Vanishing
by Howard Axelrod 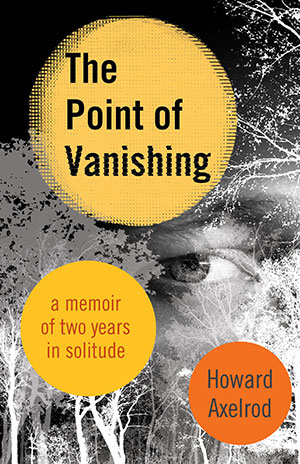 Notice: Trying to access array offset on value of type null in /home/offtheshelf/public_html/web/app/themes/ots/_inc/template-parts/books/book-modal.php on line 31
|+| Add to Your Shelf
The Point of Vanishing
Howard Axelrod