I read Jessica Knoll’s LUCKIEST GIRL ALIVE when it first debuted in the summer of 2015. We were in a heat wave, and the air itself seemed to sizzle. I read it on the beach, under an umbrella and covered with a towel because I couldn’t be bothered with silly things like sunscreen reapplication and child-minding. I shushed people who tried to talk to me. Few books have sucked me in so completely, so quickly.

LUCKIEST GIRL’s TifAni FaNelli is a nasty, razor-sharp narrator. She’s left behind her Philadelphian upbringing for New York City. I worked in the town of Malvern, off the Main Line, for twelve years, and the first thing that drew me in was the specific town names, street names, names of schools, rivers (hello, Peace of Pizza).

Ani, which she goes by now, is engaged to Luke, who is devastatingly handsome, successful, wealthy. The first page killed me. Ani stands in a Manhattan Williams-Sonoma and fantasizes about Luke: “I could decide not to let go. Slip the forged nickel and stainless steel blade (the Shun, decided I liked it better) soundlessly into his stomach.”

The story winds backward, facilitated by a documentary. The filmmaker hinting at horror: It’s time the public knew your side.

Knoll drew comparisons to GONE GIRL, and I read it with that in mind. I have to say, TifAni is no Amazing Amy. Amy pulled the reader close to her with her fake diaries and her charm, her guile. But Amy was a lie. Ani is exactly who she’s pretending to be, from page one. Knoll had to do something near impossible: She handed us a cunning and borderline wretched main character, as forthright about her psychosis as Amy is deceitful, and still, readers were addicted. We had to know: How did she become this person?

We travel back to high school with Ani, back to the hallowed halls of the Bradley School. We meet Arthur, whom I loved and alternately loathed, because I could feel, even early on, that the novel’s darkest moments would eventually come from him. His loose cannon-ness kept me flipping through the middle pages as fast as possible.

Ani is alternately in, then out, with the HOs: Hilary and Olivia. She’s invited to a party, then bullied, raped, and ridiculed. I can’t say any more without spoilers. Just trust me, you won’t be able to stop turning the pages.

What I loved the most about LUCKIEST GIRL is that Ani goes through an anti–Amazing Amy arc: She starts out cutting, and only by experiencing her nightmare with her, do you get to see the real Ani. Her heroic act, and later, the misunderstood repercussions. The Ani from chapter one and the end, chapter seventeen, are two drastically different people. The metamorphosis isn’t a sleight of hand, it’s the result of reliving something so raw and devastating.

Masterful storytelling, lush, descriptive prose, and unrelenting suspense make LUCKIEST GIRL ALIVE one of my favorite books. Even now, more than a year later, I still think about Ani. 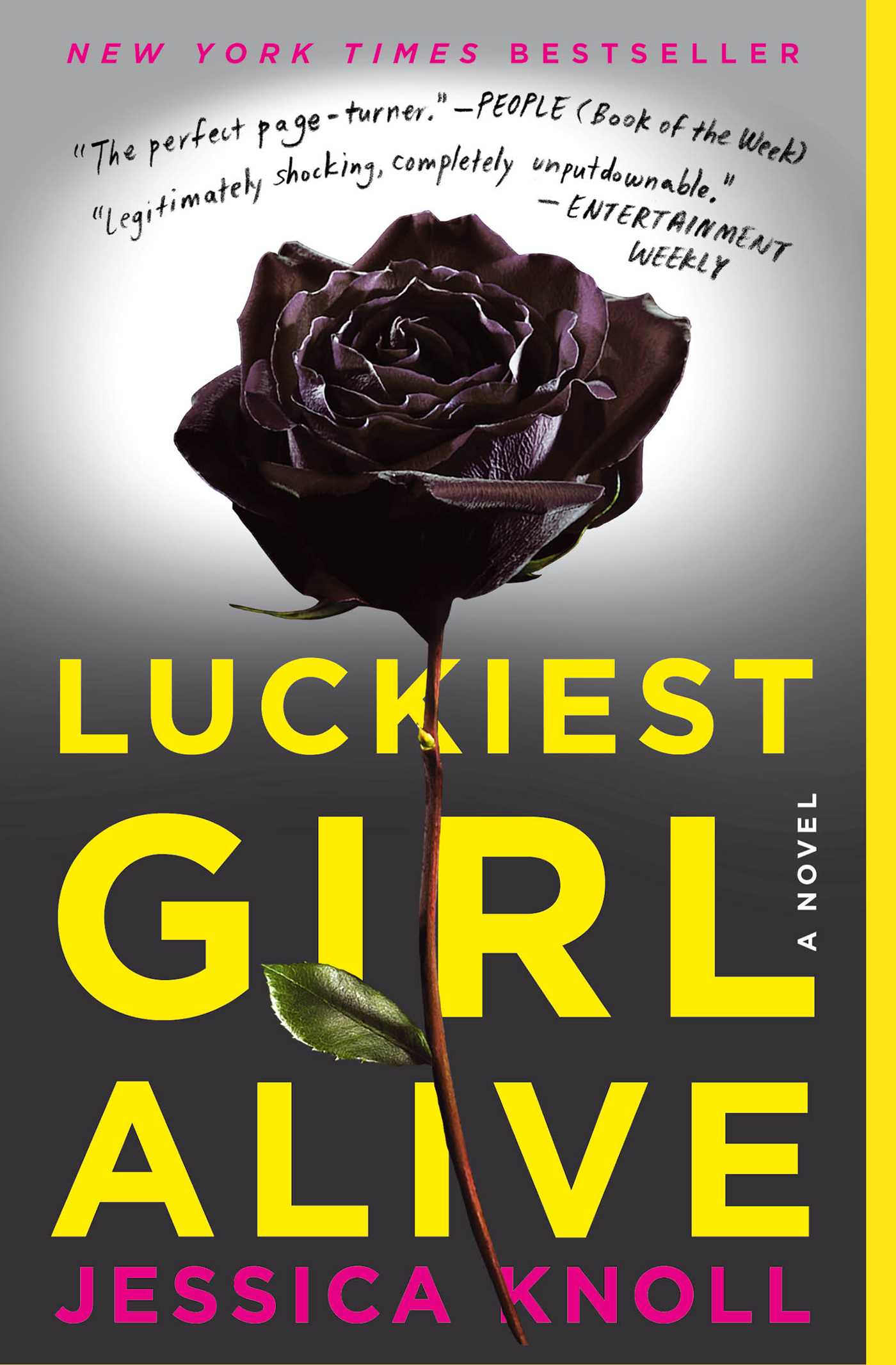 Ani FaNelli has a covetable life: a glitzy magazine job, a blue blood fiancé, and a wardrobe to match. But when a violent, public trauma from her past threatens to destroy the life she’s worked tirelessly to attain, Ani must carefully weigh her chance at redemption. Jessica Knoll brilliantly constructs a new literary frenemy you’ll love to hate in this New York Times instant bestseller.

A Razor-Sharp Narrator Who Is No Amazing Amy