Merry is eight years old and her teenage sister is acting out in frightening, disturbing ways. Is she mentally ill? Demonically possessed? The adult Merry thinks she knows the answer after tragedy has consumed her family in Paul Tremblay’s engrossingly scary novel A HEAD FULL OF GHOSTS. But as readers we’re not so sure, a testament to Tremblay’s skillful legerdemain which keeps us guessing until the end (and afterward).

In a small New England town that has fallen on hard times, Merry’s father has been unemployed for a while and their savings have been stretched to the breaking point.

Adding to the tension is fourteen-year-old Marjorie’s increasingly bizarre behavior: humming the “Hungarian Suicide Song” of “Gloomy Sunday,” punching holes in the wall and crawling up it like a spider—which is literally keeping everyone up at night. Her mother turns toward medication and therapy for her, her father toward the local Catholic Church. Meanwhile, eight-year-old Merry—witness to many of the most frightening episodes, like when Marjorie threatens to pull out Merry’s tongue the next time she’s asleep—struggles to make sense of it all.

When the local priest connects them with a reality show interested in filming an exorcism, the opportunity might just solve their financial woes and give them their daughter back. What could go wrong?

Lots. A whole heck of lots.

But what makes this a standout to me is the rumbling undercurrent of quintessentially modern ambiguities. This is not a tale of good versus evil—it’s a gray hinterland where no one has an answer, where nothing is ever fully known, and where vultures that promise resolution serve only to pick the family clean, leaving a bigger mess behind.

I can’t say what really happens at the end of A HEAD FULL OF GHOSTS—my first reading left me with one take, my second with another, and I still find myself thinking about it months later. I will say, watch those last few sentences carefully. This book will get under your skin, creep around your dark and twisty places, and leave you with the unsettling sense that maybe you don’t know what you think you know.

Maybe you don’t know anything at all.

A Head Full of Ghosts
by Paul Tremblay 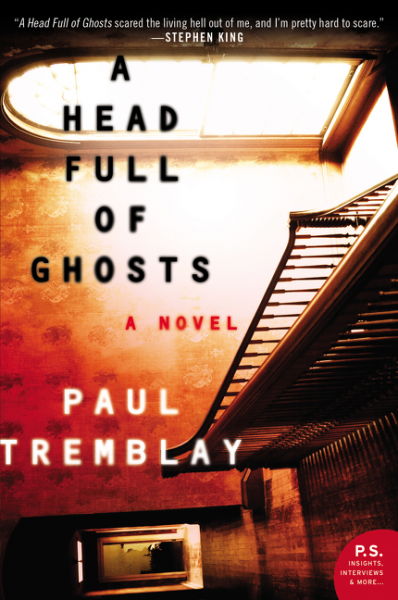 |+| Add to Your Shelf
A Head Full of Ghosts
Paul Tremblay

Possessed Teenagers, Exorcisms, and Reality TV… What Could Go Wrong?