As evidenced by my reviews of/obsession with EMPIRE FALLS and & SONS, stories about small towns and big families just hook me. I can’t really explain it—there’s just something about people and drama stuck in a contained space that’s guaranteed to please every single time.

Which is why, when I first heard of Annie Proulx’s Pulitzer Prize– and National Book Award–winning novel THE SHIPPING NEWS, I knew it was probably for me. The story follows a third-rate newspaperman named Quoyle, who moves himself and his two daughters to the coast of Newfoundland after his wife passes away. Once there, the trio settles into the childhood home of Quoyle’s aunt Agnis, and Quoyle takes a job for the paper reporting the arrivals and departures of ships from the local ports. As Quoyle restarts his life and settles further into the community, he begins to find a new and much more rewarding life, but he also learns deep and troubling secrets about his ancestors.

Like any great small-town story, what matters most in Proulx’s modern classic are the relationships. I loved the bob-and-weaves between Quoyle, his daughters, and the people they meet; they were all so remarkable, and yet so completely ordinary at the same time. The mundaneness is perfectly matched with Proulx’s writing style, though that isn’t meant as a criticism. Her voice is almost oceanlike, hypnotizing you into a rhythm that resembles waves lapping the shore. This is the opening line, for crying out loud:

“Here is an account of a few years in the life of Quoyle, born in Brooklyn and raised in a shuffle of dreary upstate towns.”

There you have it. This is the story of a man, a regular man who could be anyone and anywhere. He might not be special, but the story about to follow is. There is some suspense and drama, but the book completely avoids melodrama or the fluorescent screams of “SCANDAL!” The momentum builds slowly, taking you deeper and deeper into the town and its past, until you realize you’re 200 pages in and can’t stop reading.

Almost a reverse-coming-of-age, there was something calming and redeeming (just like in Richard Russo’s Pulitzer winner, EMPIRE FALLS) about spending an afternoon with THE SHIPPING NEWS, looking through the eyes of a middle-aged man who sees the hardness of life and just tries to make the best of it. It’s not exactly a beach read, but you’ll be glad you spent your time with Quoyle and his town, leaving much fuller than when you arrived.

The Shipping News
by Annie Proulx 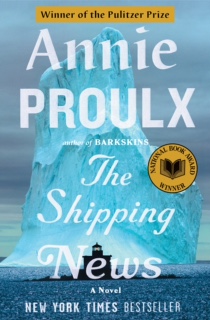 |+| Add to Your Shelf
The Shipping News
Annie Proulx

Awarded the prize in 1994, THE SHIPPING NEWS is an enchanting look at the contemporary American family. When a third-rate newspaper hack’s cheating wife dies, he and his daughters move to Newfoundland, where they must face their personal demons as a long winter closes in.

Chill Out: 8 Books with Settings So Cold You’ll Forget About the Summer Heat

The Remarkable Story of an Ordinary Man

14 Books You Need in Your Summer Beach Bag