On my Goodreads shelf, you can pretty distinctly divide the books I’ve read into three categories. The first is the classics (Austen & Co.). The second, contemporary hits (yay, publishing!) that I’ve got to stay on top of to know what’s what. The third is a bit harder to define: they’re the ones published in the last fifty years or so by masters like Junot Díaz, Jay McInerney, Joan Didion, and Toni Morrison. They’re books that have lasted, but we can’t yet predict where they’ll be in a century (though if they’re not on our bookshelves, we’ve done something terribly wrong). I call them “the modern classics,” and one of my favorites is Meg Wolitzer’s THE INTERESTINGS.

THE INTERESTINGS is a novel about six friends who meet at a summer arts camp in the 1970s, following them through their teen, college, and eventually adult years. Though we see each of the characters’ lives and experiences, we’re mostly guided by Jules Jacobson, who found her way into the group almost by accident, but seems to be the glue that keeps them together.

A crew of creatives, each member of The Interestings (a name for the collective that they agree upon over camp contraband vodka and Tang) has their own dreams and ambitions—as well as their own path to take—but they’re never too far away from one another as they grow up and face the struggles and successes of the real world. There’s also a secret that threatens to blow the group apart, which elevates the story from linear narrative to literary page-turner.

Like any good friend group, Wolitzer’s novel has a little bit of everything. There’s romance, there’s comedy, there’s drama, there’s sadness, and there’s an undeniable, everlasting devotion to the people you take the journey with. It holds all the hallmarks of a classic—unforgettable characters, realistic scenarios, and moments and relationships that make you stop, think, and relate.

As the world changes around Ash, Jules, Jonah, Ethan, Cathy, and Goodman and their bonds are tested, one thing remains the same: their history together. It’s hard not to read it and see your own Interestings as you go. I did, when I first read it as a college student abroad, missing my own clan and wondering what would happen to us after graduation (spoiler alert: we all ended up in New York, and not much except our ages have changed).

THE INTERESTINGS is a book that you’ll revisit over and over, because even if you know the ending, it seems to evolve in real time, as you do. Anyone who has ever felt connected to a group of people will devour it, and then treasure it.

The Interestings
by Meg Wolitzer 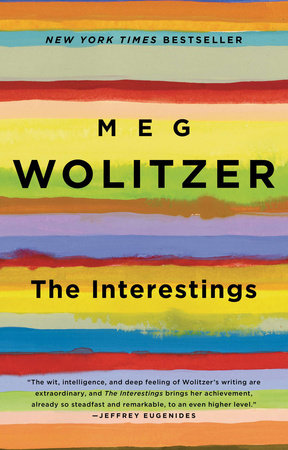 |+| Add to Your Shelf
The Interestings
Meg Wolitzer

“Like any good friend group, Wolitzer’s novel has a little bit of everything. There’s romance, there’s comedy, there’s drama, there’s sadness, and there’s an undeniable, everlasting devotion to the people you take the journey with.”

The Gang’s All Here: 11 Wonderful Books About Friendship to Read Right Now

Excited for the Hot New Books of Spring? Read These 12 Favorite Novels First!

A Modern Classic About Friendship Formed Over Vodka and Tang