That throwaway line suddenly, unexpectedly, led to a palpable need to revisit THE EYRE AFFAIR, one of my favorite books. The tough, smart, fallible protagonist Thursday Next goes about her job as a “literary detective” in the alternate-reality setting of London in the 1980s, where one actually can set foot inside the greatest tomes of all time.

Yes, what you are thinking is absolutely correct: the premise is way too cutesy. But unabashedly so. Jasper Fforde takes nothing seriously, and in a bizarre way that makes the story, the characters, even the words themselves have an absurdly misplaced and seemingly incongruous gravitas.

So what does a Literatec do? Next spends her days breaking up brawls over Shakespeare authorship and tracking down forgeries in the gang-run literary underworld. But when her aunt and uncle build a Prose Portal—a device allowing people to enter works of fiction—the purview of her job expands to all of literature. Both inside and out of it.

And, with one fateful encounter with a mysterious stranger (whose initials are “E.F.R.”) in a dark alley, Fforde and Next combine two things I love best: clever meta-literature and Charlotte Brontë.

The setting Fforde creates is so fascinating that it nearly overshadows his characters. He’s spun a world where not only do people pop into books but extinct animals are brought back to modernity as domesticated pets (Pickwick, Next’s adorable pet dodo, makes you want a flightless bird of your own), England and Russia are embroiled in a centuries-long war, and the government is under the thumb of a huge weapons-manufacturing conglomerate, intent on stalling peace. It’s a world where Richard III is the cult classic “The Rocky Horror Picture Show” only wishes it could be, dead poets trump boy bands, and missionaries knock on your door to convert you to Chaucer.

And then there’s the story of how close this novel came to never existing. THE EYRE AFFAIR was rejected a whopping seventy-six times before it finally found a publisher. There are now seven books in the Thursday Next series, and there’s a Jasper Fforde appreciation event (Fforde Ffiesta) held regularly in England.

With brilliant references from Edgar Allen Poe to lesser-known Charles Dickens works, THE EYRE AFFAIR is a book nerd’s paradise/fever dream. The perfect mindless read for English majors, it’s accessible without being uninspired, intellectual but not esoteric. It’s THE HITCHHIKER’S GUIDE TO THE GALAXY for librarians. If you’ve ever finished a book and felt that stunning sense of loss, akin to a close friend moving far away, please do us all a favor and say hello to Thursday. Trust me—she’s one of us.

The Eyre Affair
by Jasper Fforde 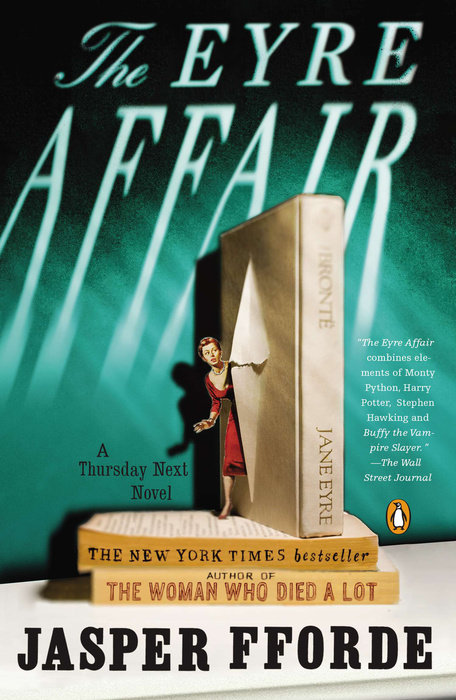 |+| Add to Your Shelf
The Eyre Affair
Jasper Fforde

In alternate reality England, time travel and cloning are routine and citizens live in a virtual police state. Thanks to a nationwide obsession with literature, Thursday Next makes a comfortable living as a renowned Special Operative in literary detection. But when characters begin to go missing from great works of literature, she faces the greatest challenge of her career.

12 Bloody Good Mysteries—Even for the Faint of Heart