When my three sons were young, my bag was always full. From sunscreen to hand sanitizer to juice boxes, it was packed to the brim. My schedule was always just as jammed with playdates and soccer practice and doctors’ appointments.

That overly full time was also when Jack Reacher came into my life, and I freely admit to being slightly obsessed with Lee Child’s wildly popular series.

Now, my interest isn’t simply because Jack Reacher is 6’5”, is blue-eyed, has a physique like Adonis, is extremely clever, and treats women like goddesses. Allow me to explain.

Lee Child’s writing is compelling and precise; his plots are intricate and twisting yet always logical. I can never turn the pages quickly enough.

In PERSUADER, Reacher is confronted with a mystery that needs solving: He spots a man he thought he killed ten years ago—a guy who deserved to be killed.

Catching the criminal a second time requires Jack to juggle a double-agent gig. He must infiltrate a strange, secretive family connected to the criminal by staging a fake kidnapping attempt of their son. He then must foil that plot to save the boy and in turn earn the family’s trust. When the mother is being assaulted by a gigantic man, Reacher kicks him in the kidney so hard “it would have cracked a utility pole.”

Of course, Reacher solves the mystery and catches the man he thought he had killed a decade ago. There was never any doubt in my mind. After all, Jack is sharp enough to hide his identity by registering at motels under the names of vice presidents. In this book, he uses the name Calhoun—John Quincy Adams’s vice president.

The heroic and downright dreamy descriptions of Reacher don’t exactly discourage fantasies. During a mom’s night out, a friend told me that she tore through the entire series in two weeks. What we talked most incredulously about was not his looks, his daring double timing antics, or his moral code. The sexiest thing about Jack Reacher is that he is completely unencumbered.

Unlike us parents, who can’t shower unless we plan it with military precision, Reacher hops on buses and gets off at a town if he likes its name or if there’s a woman he’s pursuing—and there’s always a woman. He carries exactly one item as he traverses the country: a toothbrush.

Reacher protects those who deserve protecting: He battles the bad guys—and although it gets fierce and bloody, he always wins. Then he simply puts his toothbrush in his pocket and heads out to his next destination. 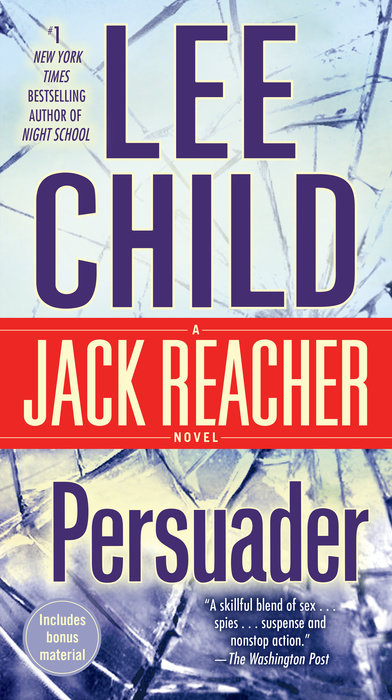