Rachel Morse has brown skin and startling blue eyes. She has an African-American GI father named Roger who recites Shakespeare and charms women. She has a shy white Danish mother named Nella who was more than happy to be charmed. Thanks to her parents’ unlikely union in Germany, Rachel’s childhood is steeped in two rich cultures. While this should be a gift, it instead coalesces to inspire the dreaded “What are you?” question when she moves to America.

For the multiracial among us, it’s a question we will have to answer at least once in our lives. In Heidi W. Durrow’s heartbreaking coming-of-age story THE GIRL WHO FELL FROM THE SKY, it’s a question Rachel has to answer repeatedly for others but perhaps most importantly for herself.

We are introduced to Rachel when she’s just eleven years old and has survived a horrific tragedy. To the shock of her community, Nella and her three young children have jumped from the roof of their nine-story apartment building. The only one to survive the fall is Rachel. When her absent father does not come to her aid, she is sent to Oregon to live with her father’s African-American mother.

Having grown up in a liberal corner of Europe, the racism Rachel encounters in 1980s Oregon is shocking. In her new school she is not black enough to be considered black—her straight hair is wrong, her speech patterns are different, and her light eyes are the worst of all. And Rachel is not encouraged by her father’s family to hold on to her Danish side, a painful cultural loss in the wake of her tragedy.

She is suddenly a young girl without a mother—her mor, as she often says in Danish—desperate to be guided by her, even if she’s only a memory. As Rachel grows up, she realizes that it is not only her race she is struggling to understand but also her life as an intelligent, curious woman who the world is desperate to define before she can define herself.

When it comes to memorable books about race, Heidi W. Durrow places herself among the best with THE GIRL WHO FELL FROM THE SKY. It fits neatly alongside Toni Morrison’s THE BLUEST EYE and PASSING by Nella Larsen (another African-American Dane, like Durrow herself) and inspires us to think about what it means to be mixed in America today.

Karin Tanabe is the author of THE GILDED YEARS.

The Girl Who Fell from the Sky
by Heidi W. Durrow 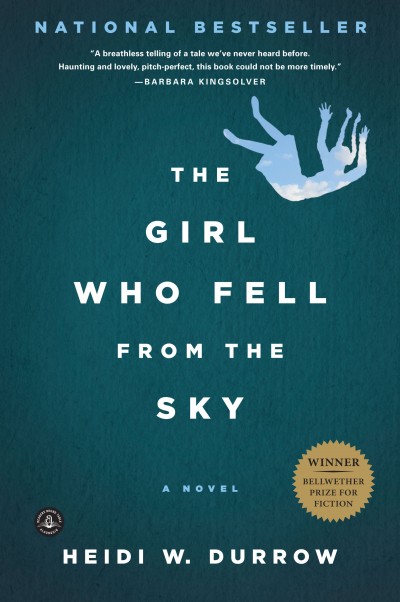 |+| Add to Your Shelf
The Girl Who Fell from the Sky
Heidi W. Durrow