Before I read Lynn Cullen’s novel MRS. POE, I didn’t know anything about Edgar Allan Poe except that he wrote a lot of macabre tales like THE TELL-TALE HEART. I was never a fan of scary stories but this one about his tangled love life piqued my interest.

Lynn Cullen had me from the first paragraph.

“When given bad news, most women of my station can afford to slump onto their divans, their china cups slipping from their fingers to the carpet, their hair falling prettily from its pins, their fourteen starched petticoats compacting with a plush crunch. I am not one of them.”

MRS. POE is told from the point of view of Frances Osgood, an intelligent woman dealing with the fallout from a foolish decision: marrying Samuel Osgood, a philandering artist who leaves Frances and her two young daughters stranded and penniless among the upper classes in New York. Divorce is so culturally taboo in 1845 that Frances’s only option is to live at the home of a friend and peddle her poems and stories to various unsympathetic newspaper editors, all while maintaining a ruse of wealth and respectability.

At a literary salon, Frances meets Edgar Poe, and though he appears to dislike everything and everyone, he quietly takes a shine to Frances. Poe is at the height of his popularity, having just published “The Raven,” a poem so eerie it seems everyone in New York is quoting it.

The novel takes its title from Edgar’s very young wife, Virginia, a cousin whom he married when she was just thirteen. This was nearly as gossip-worthy then as it would be now. But over the course of the story, Frances learns about Edgar’s early life, which was as destitute and heartbreaking as that of any character from Dickens (whom Poe hated). For all his strangeness, the reader begins to understand and appreciate him for rising above a childhood that should have had no future at all, much less one as a literary lion.

The title also refers to Frances, who (history tells us) carried on an emotionally and possibly physically intimate friendship with Edgar, ostensibly at Virginia’s urging. Virginia’s motives, however, are always in question. As Frances navigates the labyrinth of her feelings for Edgar within the viselike confines of the period’s social etiquette, we can never really be sure who Virginia is and exactly what she wants.

The novel is meticulously researched, deftly packed with little bread crumbs of phrases and customs from the past, all while telling a page-turning story. The visual images are so clean and clear it feels like you’re watching footage of the highbrow and the lowborn as they make their way through opulent mansions and fetid slums.

Between its cinematic visuals and the fact that it’s based on the lives of real people, MRS. POE is the kind of novel you carry with you afterward, remembering Frances and Edgar as if they were friends you had when you lived in New York in 1845. 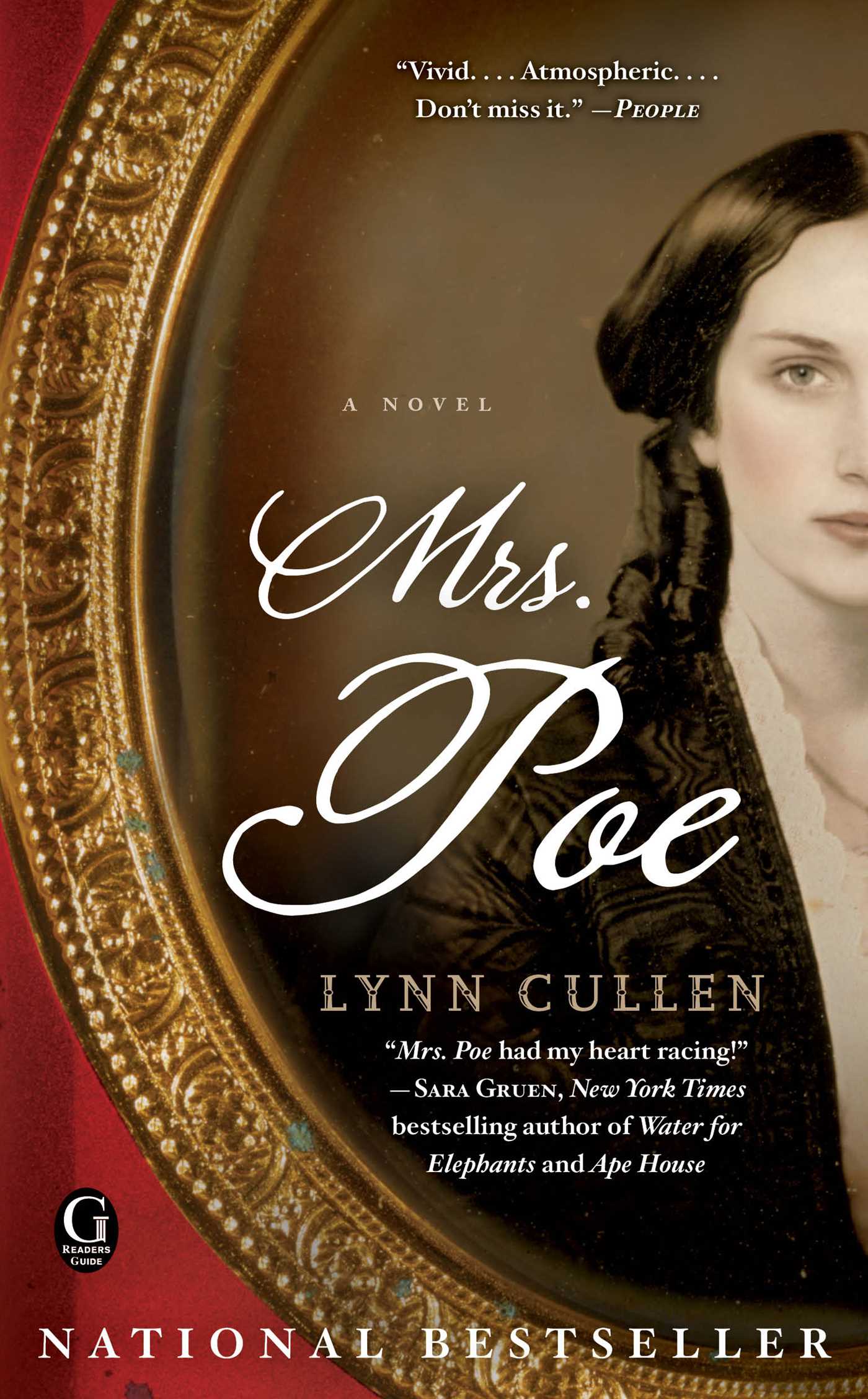 Lynn Cullen had me from the first paragraph.

“When given bad news, most women of my station can afford to slump onto their divans, their china cups slipping from their fingers to the carpet, their hair falling prettily from its pins, their 14 starched petticoats compacting with a plush crunch. I am not one of them.”