CLEOPATRA: A LIFE, like all good nonfiction, sticks to the facts and avoids exaggeration. Yet it still reads as part drama, part farce, part tragedy, part thriller, and part romance, bringing new meaning to the old adage, “Truth is stranger than fiction.”

Stacy Schiff—bestselling author of THE WITCHES—won the Pulitzer Prize for her book CLEOPATRA: A LIFE, which takes on the challenge of telling Cleopatra’s true story while at the same time illustrating how unfair it is that her narrative has always been written by other people. Schiff does a brilliant job bringing Cleopatra to life, sifting through vast numbers of historical sources to show which are valid and which are doused in propaganda. In the process, she paints a portrait of a woman whose accomplishments are varied and extraordinary, and who should be known not as a scandalous Halloween costume but as a pioneering early career woman whose story has been cruelly usurped over the years.

Cleopatra’s biography is murky: she left behind almost no written records, and most of our sources come from men who, Schiff suggests, resented her for her wealth, felt threatened by her power, and didn’t know how to handle her independence. As a result, her actions are constantly reinterpreted—and misinterpreted—by others.

When she outsmarts a man, or performs a particularly savvy political maneuver, she is instead seen as having blinded him with her sexuality, or else bewitched him with her sorcery. (Cleopatra seems to have a bad habit of poisoning men with lust and causing them to self-destruct, through no fault of their own.) Schiff offers a sobering explanation: “It is less threatening to believe her fatally attractive than fatally intelligent.”

Many of the accusations levied against Cleopatra seemed to stem from petty playground politics and had more to do with Roman insecurity than with Cleopatra’s mischief. Schiff reminds the reader that at the time, Alexandria—not Rome—was the epicenter of art, architecture, math, and literature.

Rome reacted to its feeling of inferiority by trying to assume even greater superiority, reducing Alexandria’s many achievements to the products of a wild, irrational, decadent, sensual, and immoral land—exactly the sort of un-Roman place that would produce a salacious and devious queen. Cleopatra was foreign and unknown, and therefore dangerous.

Historical drama aside, what makes CLEOPATRA memorable is its odd and delicious historical detail—from Marc Anthony’s drunken, frat-like revelries (which once left him vomiting on the Senate floor instead of delivering a speech), to the excessive amenities that Cleopatra enjoyed on her traveling barge (full libraries, lecture halls, gardens, grottos, and aquariums, among other necessities), to the variety of house pets in the house of the Ptolemies (giraffes, pythons, rhinoceroses).

Hollywood has had its part in constructing the lore—many think of Elizabeth Taylor’s portrayal. But Schiff dispels some commonly held myths: Cleopatra was not actually Egyptian (she was Greek), nor was she terribly beautiful (she had a large hook nose).

CLEOPATRA is not only a wonderful examination of a misunderstood life but a fascinating and relevant exploration of what happens when someone else writes your story for you. Thankfully, this is a retelling that Cleopatra herself may have liked. 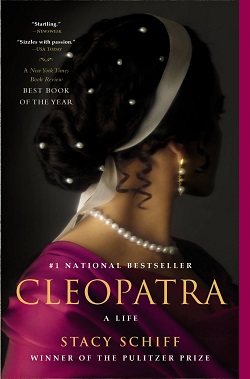 Cleopatra has gone down in history for all the wrong reasons. Her supple personality and the drama of her circumstances have been lost. In a masterly return to the classical sources, Stacy Schiff boldly separates fact from fiction to rescue the magnetic queen whose death ushered in a new world order.