I picked up Evie Wyld’s ALL THE BIRDS, SINGING primarily because of its gorgeous and intriguing cover. It reminded me of the James Herriot stories my mom read with me when I was a kid. You know those books—the ones with the stunning watercolors of border collies herding fluffy white sheep across luscious green fields in England.

It only took the first sentence (“Another sheep, mangled and bled out, her innards not yet crusting and the vapours rising from her like a steamed pudding.”) for me to realize that ALL THE BIRDS, SINGING wasn’t going to be a James Herriot story, and things were going to get drastically worse than a lost sheep.

Jake is a tall, muscular Australian woman living in isolation with her mutt, fittingly named Dog, and fifty sheep in an old farmhouse on a remote British island. She’s also the only female sheep farmer in the community, left to fend for herself amongst the men. Jake came to the secluded island after being on the run from an abusive, controlling man named Otto who forced her to live with him for years. She has finally started to feel a semblance of safety in the small, anonymous town—until someone, or something, starts killing off her sheep one by one.

Jake rationally tries to convince herself that the entity responsible is a wild animal or one of the local teenagers pulling a prank, but she fears a more sinister culprit is to blame. Is this Otto’s malicious way of letting Jake know he finally found her and isn’t letting her get away? Or is it perhaps the mysterious stranger who suddenly appears on her land? When Jake meets the stranger, Lloyd, as he drunkenly tries to seek shelter in her barn from the freezing weather, she takes pity on him and lets him stay. Her suspicion regarding Lloyd slowly dissipates as he helps her with her work and opens up about his past.

The chronological story of Jake’s life on the island is interspersed with harrowing glimpses into her past: shearing sheep in Western Australia, working as a prostitute, and the traumatic events of her life as Otto’s captive that perpetuate Jake’s paranoia and isolation. Through these glimpses, I gradually started to understand the brusque, hardened woman before me. The more I knew, the more I wanted to know and the more I cared about Jake. The dual narrative of past and present is so incredibly compelling and suspenseful that I was turning pages late into the night in pure anticipation of what would happen next.

ALL THE BIRDS, SINGING is not only an eerie and mesmerizing mystery of missing sheep and past intrigue, it is also a profound testament to the hardships of being a woman in a man’s world. Jake’s entire life has been shaped by men trying to own or control her. As a prostitute, Jake was subject to the desires of her male customers. As Otto’s captive, her daily life was run according to his schedule and his desires. As the only female sheep farmer in her small English town, Jake is an outcast.

With considerable grace and compassion, Wyld exquisitely demonstrates exactly what it means to be an outsider. Illuminating, insightful, and simply stunning, ALL THE BIRDS, SINGING is a beautiful story about trust, trauma, and triumph that everyone should read.

All the Birds, Singing
by Evie Wyld 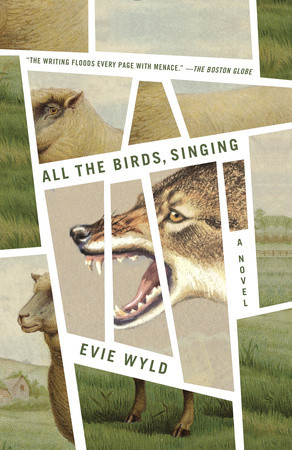 |+| Add to Your Shelf
All the Birds, Singing
Evie Wyld