After a long illness, my mother died when I was twenty. When your mother dies when you are young, every day is Mother’s Day. When someone hurts your feelings, you think of how she’d comfort you, if she were here. You fall in love, you fall out of love, you marry, you have children, you get a promotion, you are laid off, and you think of her. Unless you can’t forgive her for leaving too soon, you will idealize her love and kindness for all time to come.

But not all idealized mothers are created the same. For instance, mine isn’t the sainted Marmee March in Louisa May Alcott’s LITTLE WOMEN. Nor is she the martyred Maria Wyeth in Joan Didion’s PLAY IT AS IT LAYS. My idealized mother is someone akin to Lady Diana Cooper, beautiful, funny, fashionable, intelligent, urbane—but happiest in the countryside with her goats and cow. DARLING MONSTER collects the letters of Lady Diana to her son, John Julius Norwich, from 1939-1952 (no relation).

“Please, darling monster, don’t do it again. Write as often as you can. It’s so sad waiting for letters that don’t come and are not even written. I love my darling boy. Don’t treat me so badly again or I’ll have your lights and liver when I get home,” Diana wrote to John Julius, age ten, soon after he was sent from London to a boarding school at the outbreak of war. It is here where these deliciously funny and delightfully intelligent letters begin, sometimes written daily, or at least two or three times a week.

Diana, born in 1892, was brought up in one of the grandest houses in England, Belvoir Castle. The youngest daughter of the eighth Duke of Rutland, she was in fact the lovechild of her mother and the Honorable Harry Cust from Belton, the neighboring estate. Before World War I, Diana was the toast of Mayfair. But she had the audacity to marry for love and not property. Her beloved was Alfred Duff Cooper, who, as a confidant of Winston Churchill, became one of the leading politicians during World War II and later served as the British ambassador in France.

Children of the British establishment who were considered possible kidnapping targets were sent to live in Canada and the United States during the war. So in 1940, John Julius was evacuated to Long Island for the duration.

Meanwhile, Diana and Duff served on behalf of Churchill and England. Her letters to John Julius describe not only their friendship with Churchill but also with high-profile figures from Franklin D. Roosevelt to Queen Elizabeth to Pablo Picasso. There is much delicious gossip: “Lunch with the King,” Diana writes to John Julius in 1948. “The luncheon party was six strong—K., Q., two princesses and us. . . . They don’t listen to him [the King] much; it’s her [the Queen’s] household. The Queen gets very pink in the face. They say she puts a lot back—port in lashings before lunch . . .”

Beyond the gossip and crackling repartee, there is also much tenderness between mother and son. There is the courage to weather their separation caused by war, and there is the war itself to be weathered with the best possible courage. “It is one o’clock, and I’m off to have lunch with Winston,” Diana writes from London during the Blitz. “There is a blanket of snowy cloud and the guns are banging away very disagreeably. It may be the invasion but I doubt it.”

It’s this sense of an unsinkable spirit in DARLING MONSTER that I like best. Replace world war with another kind of war, that of failing health, and I remember my mother fighting her good war, battling on so that even when the enemy wins, it never triumphs. 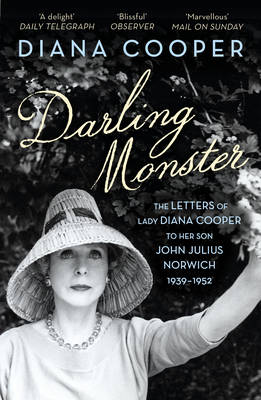 A Tender Story of a Darling Mother and Her Beloved Son