In the fall of 1991, I was working on the side of freeways in and around Salt Lake City planting trees. Planting trees sounds a bit glamourous to the uninitiated, or it did to me. I pictured forests, a small shovel, and little saplings to tuck in the ground.

Our “forest” was the strip of dirt between the freeway and the concrete fence that separated the freeway from the neighborhoods. My small shovel was a twenty-pound hoedad that I made my holes with by swinging it over my head and slamming it into the dirt—dirt that had been compacted many times over by heavy equipment. And those little saplings? They were small shrubs in five-gallon buckets—picture big holes and heavy buckets. The days were long and the nights were too short for recuperation.

One night that does stand out for me from those months in Salt Lake City was the night I went to the Natural History Museum of Utah to see Terry Tempest Williams, a poet and naturalist, speak about her newly released book, REFUGE: AN UNNATURAL HISTORY OF FAMILY AND PLACE.

In REFUGE, Terry Tempest Williams examines the issue of health from many angles. She weaves in the health of the Great Salt Lake Basin; the health of the Bear River Migratory Bird Refuge; the health of the matriarchs of her family of “downwinders,” people who live downwind of areas where nuclear weapons testing took place; and her own health as she struggles to retain compassion for the world that has created struggles for the natural places and people that she loves.

To survive these struggles, Williams relies on the strength of her ties to her family and to the land around her. She draws equal solace from a walk at the lake’s shore and a talk with her mother. Through this solace, the reader is witness to a process of loss and grief as well as one of grace and understanding.

I first read REFUGE twenty-five years ago. I didn’t even love birds yet. I don’t reread books very often—actually, pretty much never—but I just reread this book, and I loved revisiting it through the eyes of a birder and a lover of the natural world of the West.

To hear Terry Tempest Williams read her own words was more of a religious experience than any sermon I’ve ever sat through. I hear her voice in every book, every interview I’ve since read of hers. This experience solidified my belief in the power of words to change lives. 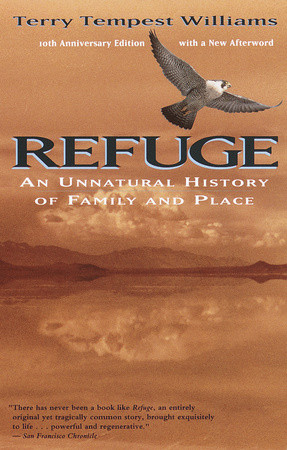 A Powerful Memoir of Solace, Grace, and Understanding