I spot them whenever I’m there: tourists with copies of WALKS IN HEMINGWAY’S PARIS in their hands. Inspired by Ernest Hemingway’s memoir A MOVEABLE FEAST, published posthumously in 1964—or perhaps by THE PARIS WIFE, a novel by Paula McClain written years later from the perspective of Hemingway’s first wife, Hadley Richardson—they traipse along the Boulevard du Montparnasse, peeking through the windows of La Rotonde and La Closerie des Lilas, and then climbing the slope of Montagne Sainte-Geneviève.

The aroma of freshly baked bread from the boulangeries hangs above the cobblestone streets of the Latin Quarter as the tourists pass the old limestone houses, cut through the Place de la Contrescarpe with its crowded cafés, and pause to read the plaque above the royal-blue door of 74 Rue du Cardinal Lemoine, where Ernest Hemingway and Richardson lived when they arrived in 1921.

A MOVEABLE FEAST is a love letter to La Ville Lumière and a testament to Hemingway’s boundless artistic ambition. Permeating every page is the heartbreaking story of love gained and lost. Forty-seven years later, Paula McClain brought Hadley’s narrative to life in the remarkable novel THE PARIS WIFE. Anyone interested in Paris during the 1920s, and the revolutionary art that still casts its shadow over our present day, would be well-advised to read them back-to-back to examine and appreciate the differences in perspective.

It is exciting to see the city through Ernest’s eyes—to study the Cézannes with him, to sit over a café au lait while he writes one of his Michigan stories, and to meet Gertrude Stein and Alice Toklas, Ezra Pound, Ford Maddox Ford, Zelda and F. Scott Fitzgerald, the artist Jules Pascin, and Sylvia Beach, the bookstore proprietor who helped give us James Joyce’s ULYSSES.

All of it very exciting—and misleading, because none of us are among the world’s most influential writers. Instead, we, with our modest gifts, relate more to Hadley’s experience as told in McClain’s well-researched historical novel. Were we in Paris then, our perceptions more than likely would have been in tune with hers: those of an American struggling to understand a foreign place, overwhelmed by the bohemian expatriates surrounding us, on the margins of the aesthetic chatter in the cafés, terribly lonely as our spouse disappears to write. Ernest, with his genius, could transform a cold beer, potato salad, and frankfurter in mustard sauce at Lipp’s into a prose poem and a meditation on his desire for greatness. Hadley, on the other hand, with her clear-eyed vision and less exalted view of herself, would have seen it as lunch.

As someone who writes novels about the challenges of love, I find the differing perspectives on their marriage fascinating. In THE PARIS WIFE, it gradually dawns on Hadley, after the birth of their son, that her friend Pauline Pfeiffer, the stylish, independently wealthy writer for Vogue, is out to steal her husband, a fact that she learns at last on a trip with Pauline and her sister Jinny.

Yet years before, when the Hemingways are deeply in love, Ernest tells us something else entirely. They had won at the horse races that afternoon and they are hungry and treat themselves to an expensive dinner:

“When we had finished and there was no question of hunger any more the feeling that had been like hunger when we were on the bridge was still there when we caught the bus home. It was there when we came in the room and after we had gone to bed and made love in the dark, it was there. . . Life had seemed so simple that morning.

But Paris was a very old city and we were young and nothing was simple there, not even poverty, nor sudden money, nor the moonlight, nor right and wrong nor the breathing of someone who lay beside you in the moonlight.”

In the end, reading A MOVEABLE FEAST and THE PARIS WIFE together reveals one of the hardest truths about love. At times, regardless of our passion, when it comes to our perceptions of our beloved, we are finally, and terribly, alone.

The Paris Wife
by Paula McLain 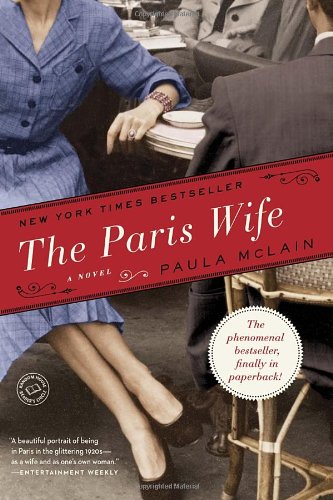 |+| Add to Your Shelf
The Paris Wife
Paula McLain

This deeply intimate novel captures the love affair between two unforgettable figures: Ernest Hemingway and his first wife, Hadley Richardson. Despite their extraordinary bond, the Hemingways are ill-prepared for the hard-drinking and fast-living life of Jazz Age Paris, and they find themselves facing a deception that will lead to the unraveling of everything they’ve fought so hard for.

Behind Every Great Man: 4 Historical Novels About Influential Women

Papa, Paris, and Pilar: 16 Books to Help You Celebrate Heming-day the Heming-way 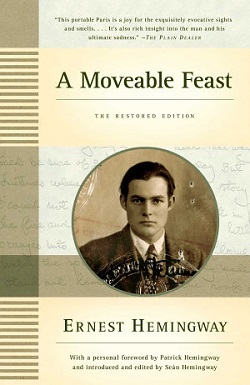 |+| Add to Your Shelf
A Moveable Feast
Ernest Hemingway

A MOVEABLE FEAST is a love letter to La Ville Lumière and a testament to Hemingway’s boundless artistic ambition. Permeating every page is the heartbreaking story of love gained and lost.

A Love Letter to a Hemingway Classic

11 Must-Reads Selected by a Bestselling Author

The Shelf of Shame: 7 Books We Never Finished

I Want to Be French: 9 Books Full of Joie de Vivre