Those who haven’t read Karen Joy Fowler’s WE ARE ALL COMPLETELY BESIDE OURSELVES may or may not be aware of the “spoiler” that gives this story its power—but either way, this book will stick with you forever.

WE ARE ALL COMPLETELY BESIDE OURSELVES is one of those completely absorbing books that makes the rest of the world disappear, while at the same time reminding us all too clearly of the world we come from and its occasional cruelty. The novel’s engaging narrator, Rosemary Cooke, begins “in the middle,” as her scientist father used to advise; by that time, she tells us, “ten years had passed since I’d last seen my brother, seventeen since my sister disappeared.”

Rosemary is in college at UC Davis in part because “it was far enough from home that no one would know anything about me” and also because the federal agents from whom her brother is running believe he was last seen there, suspected of taking part in the Animal Liberation Front’s infamous 1987 arson at the UC Davis veterinary lab.

At twenty-two, Rosemary is wise and witty, yet underneath her wry tone is a haunting loneliness. Her family, once happy, has been silent for years, shattered by the loss of Rosemary’s beloved sister, Fern. Rosemary was five years old when Fern disappeared, and everything she knew about how to be in the world was suddenly and irreversibly altered. Rosemary’s sense of self was dismantled, and it rendered her a different person: “Take any memory from my early childhood and I can tell you instantly whether it happened while we still had Fern or after she’d gone.”

As the novel’s second section depicts the family’s early life with Fern, the tragic mystery of what happened to Fern builds, as well as the growing effects of her disappearance on each family member. For Rosemary, who was still so young, “[t]here are moments when history and memory seem like a mist, as if what really happened matters less than what should have happened.”

Though both Rosemary and her brother, Lowell, felt the weight of Fern’s disappearance, as well as their mother’s breakdown, they had different reactions: Rosemary got quiet, and Lowell got angry. When he tells the family he wants to see Fern—“We all need to go see her. She’s wondering why we haven’t come.”—he is told to leave her alone, that she’s finally settling in where she is now. For a long time, Rosemary and Lowell believed what they were told. Rosemary learned the devastating truth from Lowell much later, forcing her to confront her own guilt about Fern’s disappearance from the family.

This exquisite, heartbreaking novel closes the distance that is often placed between humans and animals, proving that the anguish of loss transcends species. Despite being so young, Rosemary’s memory of her sister is vivid: “I remember her sharply—her smell and touch, scattered images of her face, her ears, her chin, her eyes. Her arms, her feet, her fingers.” Fowler’s novel is one of family, the aftermath of loss, and the incredible bonds that unite all creatures.

We Are All Completely Beside Ourselves
by Karen Joy Fowler 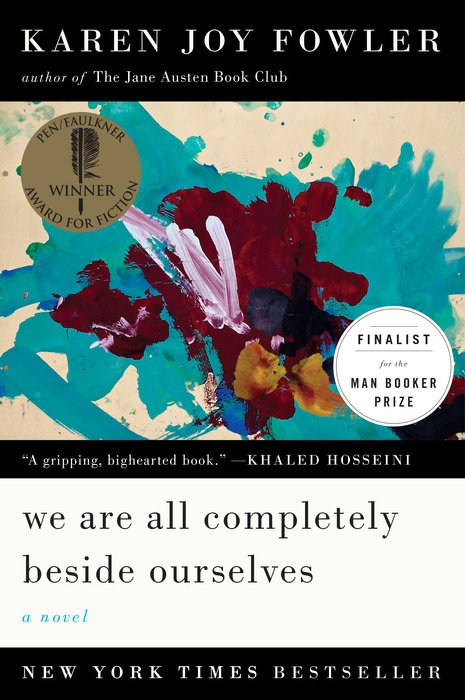 “WE ARE ALL COMPLETELY BESIDE OURSELVES is one of those completely absorbing books that makes the rest of the world disappear, while at the same time reminding us all too clearly of the world we come from and its occasional cruelty.”

We’re All Completely Obsessed with This Award-Winning Novel