Clear away the fog of the Cold War and what will you see? That’s what George Smiley and Jim Prideaux, two spies hung out to dry by their agency, are trying to find out in John Le Carré’s classic spy novel, TINKER TAILOR SOLDIER SPY. But at times TINKER TAILOR isn’t so much a spy novel as it is a ghost story about men haunted by the war.

Abandoned by his wife and forced into an early retirement from the Circus—Le Carré’s codename for British intelligence—Smiley is left alone with nothing but his memories of the past to keep him company. Unfortunately, both past and present are tainted when Smiley sets out on a mission to discover the identity of a double agent who infiltrated the ranks of the Circus and orchestrated the fall of Smiley and Prideaux. The harder Smiley tries to understand the past, the muddier his memory gets. . .

In TINKER TAILOR, war isn’t glorified or presented as uncensored and raw. The battlefields are different here, they’re lonelier and farther away in distance and time. They take the form of the isolated houses of suburban London, floating restaurants off the coast of Hong Kong patronized by Soviet businessmen, and the woods outside of Prague, empty of all but stray foxes and wounded enemy soldiers.

Smiley exists somewhere far, far away from James Bond and Jason Bourne. Neither dashing nor particularly quick on the draw, Smiley is just a man. He’s anxious, earnest, and prone to fits of jealousy. He’s afraid of a surprise attack, like any spy, but he’s also worried about his wife and his pension. He’s plagued by a sense of uselessness that comes with proximity to one’s own mortality.

A former MI5 agent himself, Le Carré knows better than anyone that a spy is just a man in disguise, and his men, like all men, are driven by petty desires and everyday anxieties. There are no heroes or villains in TINKER TAILOR—there are only men, with all their flaws and messiness and ambivalence.

Throughout the novel, Le Carré builds a world using a language of his own creation. His spies speak casually about “lamplighters” (the surveillance crew) and “scalphunters” (they do the dirty work) and “handwriting” (an agent’s signature spycraft). In fact, the word “mole” as we know it today originated from TINKER TAILOR, a novel teeming with double agents.

“I’ll say one thing for moles,” remarks Peter Guillam, Smiley’s right hand man, “it’s a long dark tunnel all the way.” It’s an apt comment on the novel as well, and while there isn’t any light at the end of this tunnel, the darkness was always more interesting anyway. 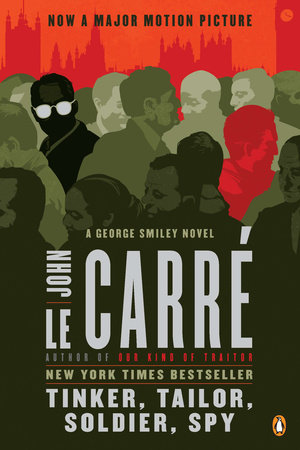 After a disastrously botched mission in Hungary forces Control's resignation, George Smiley is brought out of retirement to hunt for the Soviet double agent embedded at the top of the British secret service. As Peter Guillam, the handpicked assistant that Smiley believes he can trust, a blonde Benedict holds his own against a stellar cast.