When my family planned a trip to Scotland this past summer, we were told by everyone to read the Outlander series before we left.

Maybe it was the timing, but I wasn’t too interested in Diana Gabaldon’s historical fiction series just yet. I went to Scotland, had a great time, and didn’t think about the books until the temperature finally dropped. Once the nights became longer, I was in desperate need of a good series to binge read with lots of hot tea next to me.

So, finally, I decided to pick up OUTLANDER, the first book. And I don’t know why it took me so long.

Claire Randall, a former combat nurse during World War II, goes on a second honeymoon to Scotland with her husband. But while she’s there she stumbles upon an ancient Stonehenge-like circle and suddenly leaves 1945 and her husband behind. Knocked unconscious by her time-traveling journey, Claire finally wakes and is completely confused by where she is—and why there are so many men dressed in eighteenth-century attire around her.

She then meets a clan of Scots, who suspect that she is a spy for the English and kidnap her for further interrogation. Upset and confused when she finally learns that she is two hundred years in the past, she befriends the young Jamie Fraser, a popular and respected warrior of the clan, who takes Claire under his wing and helps her cope with her new life. Naturally, they fall in love.

I’m always nervous about these types of books. Maybe it’s the book snob in me, but I’m usually disappointed with something in a romantic historical fiction novel, even when it’s so well received and loved. But Gabaldon doesn’t just write a love story. She creates an entire world full of adventure, danger, and lots of whiskey. The relationship that blossoms from friendship to love between Claire and Jamie is, well, pretty swoon-worthy. Claire is confident with a lot of spunk and Jamie is hotheaded with a lot of heart. The combination of these two could be a recipe for disaster, but they—usually—are in harmony.

But it wasn’t just the love story that kept me reading. There’s always something wonderful about a novel that evokes such a range of emotions within five pages. I was giddy when something romantic happened, shaking the book in my hand after a sudden combat scene, and on the next page my emotions completely changed again.

Six hundred pages may seem daunting at first, but once I got into the story, I couldn’t let go. It also didn’t take very long to finish since I had to stay up late at night to find out what would happen. It’s novels like OUTLANDER that remind me how much I love reading and why it’s so much fun to get completely absorbed in a story. 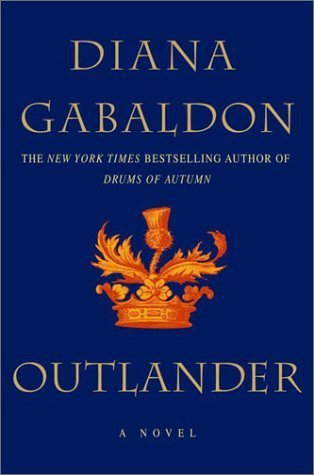 The relationship that blossoms from friendship to love between Claire and Jamie is, well, pretty swoon-worthy. Claire is confident with a lot of spunk and Jamie is hotheaded with a lot of heart. The combination of these two could be a recipe for disaster, but they—usually—are in harmony.