When I was eight, I found my best friend. Alice,* like me, was a voracious reader, with a wild imagination and a penchant for the written word. We spent days adventuring in the woods adjacent to my backyard, fashioning a woodland home from fallen branches and sweeping the forest floor with pine needles. We invented our own language and took pleasure in communicating on a different plane from our classmates. We were at home among books, taking pride in our shared position at the top of the third grade class.

Then came fourth grade, and the first heartbreak of my young life. I was enamored of Evan, the heartthrob of our elementary school class. When I finally garnered the courage to alert him to my true feelings—which, in typical nine-year old fashion, I communicated secondhand through a friend—I was astonished to learn that he had a crush on Alice. Though we remained close through adolescence, my friendship with Alice was thereafter tainted by the petty jealousies and self-doubts that plagued me as I grew from an awkward and gangly child into a self-assured woman in my own right.

Elena Ferrante’s My Brilliant Friend is a marvel, the author a literary wunderkind—and I saw in Elena and Lila’s friendship a reflection of my own girlhood. This story of the complexities of female friendship reverberated from an impoverished 1950s Italian neighborhood to my suburban childhood a half century and an ocean away. As a child, every significant moment feels as if it could break you, or change you forever—a sensation that dulls as these experiences, once sharp in their singularity, are repeated over the passing years. These feelings of desperate longing, unspeakable humiliation, and unadulterated joy are made electric in the pages of My Brilliant Friend. With Ferrante’s tender and sharp insight into the workings of a young girl’s mind, I was transported back to the insecurities of adolescence and the earth-shattering experiences of first friendships, loves, and heartbreaks.

Yet there is something decidedly unique about this story, something that defies universalizing. Lila and Elena forged their friendship in poverty, entrenched in want and fueled by dreams of overcoming the turf wars and violence that defined their childhood. They grew up in a world “full of words that killed,” and their friendship was a buoy that kept them afloat among the wreckage. But when Lila becomes engaged at fifteen, Elena’s identity, constructed in the image of her friend, is shattered: “I was no longer able to trace a coherent design in the division of our fates. The concreteness of [the wedding] date made concrete the crossroads that would separate our lives.” The last pages of this novel left me gasping for air, struck by the warped beauty and terrible injustice of growing apart—and desperate for the next book in the series.

Now, I must admit my private shame at having almost passed over My Brilliant Friend. Discouraged by the cover and the title, which to me read more “chick lit” and less literary magnum opus, I didn’t pick up this novel until the fourth and final installment in the series had been published. I finally took heed of the rave reviews and found myself instantly dazzled by Ferrante’s heartbreakingly honest narrative. This book isn’t flashy or presumptuous; it doesn’t need to be. The simple beauty of the story, of the unbreakable bond between two young girls joined by circumstance, tenacity, and the turbulence of adolescence, speaks for itself.

*Name changed to protect the innocent.

My Brilliant Friend
by Elena Ferrante 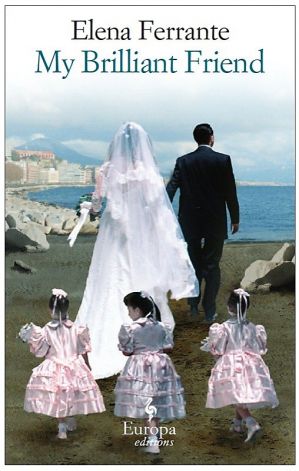 Notice: Trying to access array offset on value of type null in /home/offtheshelf/public_html/web/app/themes/ots/_inc/template-parts/books/book-modal.php on line 31
|+| Add to Your Shelf
My Brilliant Friend
Elena Ferrante

I’d like to host a dinner with an eye on close friendships. Friendships are fascinating because they are the one relationship in life that you aren’t required to be in because of birth or bound to by law. Those in attendance would ideally have a multiple-decade friendship like Elena and Lila of MY BRILLIANT FRIEND. And even though he’s not fictional, I’d love for my best friend to be sitting at the table, too.