It’s understandable that Edward P. Jones begins his introduction to the anniversary edition of Lost in the City by insisting—with the kind of preemptive impatience that makes it clear it’s not the first time he’s had to insist—that his characters and stories come not from his life but his imagination. Every writer of fiction has to answer that assumption, but Jones has to face it more than most, in part because his stories are so grounded in the map of his home city, Washington, D.C.

Jones is most celebrated for The Known World, his only novel, which won the Pulitzer Prize in 2004 and which takes place in an invented Virginia county before the Civil War. The short stories in Lost in the City, though, are all set in real places, closer to home and to his own time: on the streets and in the apartments where he was raised. He doesn’t just name-drop neighborhoods or landmarks the way many writers do, to quickly set a scene. He puts his made-up characters at actual addresses, often the site of a real building that no longer exists, sometimes one in which he once lived himself (his family moved eighteen times in his first eighteen years).

They are the kinds of addresses rarely written about when the stories of the nation’s capital are told, not the 1600 Pennsylvania Avenue that appears on the covers of a hundred spy thrillers but the “downstairs apartment” at 457 Ridge Street, not the Watergate complex but Judiciary House, an apartment building for the elderly and disabled on H Street. It’s the black side of the District, on the other side of 16th Street from what one character calls the “land of white people” (the land, I should add, where I grew up).

As precise and realistic as those addresses are, though, the stories themselves have something of the quality of fables, or of Bible stories. Lives, in a dozen or two pages, have an arc in which a decade can slip by in a moment, in which good and bad deeds have good and bad consequences (not necessarily the ones they’ve earned).

I’m reluctant to mention more of Jones’s own life—of how he was raised by his beloved, illiterate mother, of remaining an idiosyncratic outsider in the literary establishment even after winning nearly every prize it has to offer—because the stories, as he insists, have their own deeply imagined existence.

But one biographical detail does, I think, add to their atmosphere: as he has said many times, he composes his stories in his head, often for years, before he puts them to paper. He even wrote his novel that way, imagining The Known World so thoroughly over a decade that it only took him a few months to write it down after he was finally spurred to do so by being laid off from his longtime job at an obscure tax journal.

Knowing that these stories exist in a fully conceived internal universe makes it not surprising to hear that his second book of stories, All Aunt Hagar’s Children, is tightly connected to this one. Each story in that book is linked, in order, to one in Lost in the City by a shared character or theme. In “A Rich Man,” the twelfth story in Aunt Hagar’s, you learn, almost offhandedly, something of the rest of the life of the teenage runaway in “A New Man,” the twelfth story in Lost in the City. (“A Rich Man” has even been included as a bonus story in the current, twentieth anniversary edition of Lost in the City.)

And knowing that his stories incubate in his mind long before they see print makes a reader hopeful that, even though he has hardly published in the nearly ten years since All Aunt Hagar’s Children, there are more stories to come.

Tom Nissley is the owner of Phinney Books in Seattle, Washington, and is the author of A Reader’s Book of Days, which was just released in paperback by W.W. Norton.

Lost in the City
by Edward P. Jones 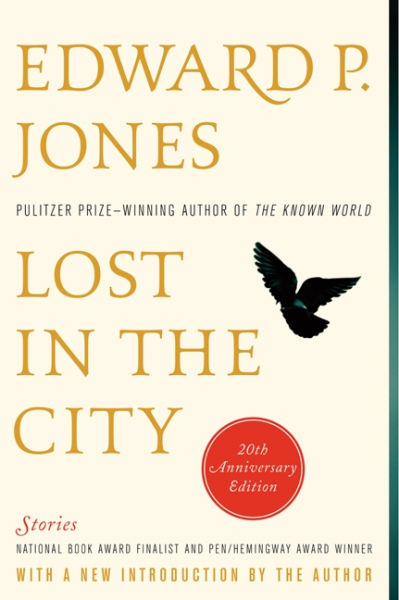 |+| Add to Your Shelf
Lost in the City
Edward P. Jones