Typhoid Mary. It is a name so well-known it has become an idiom in American English, referring to a transmitter not just of disease, but of anything harmful or catastrophic. But who was Typhoid Mary? In her rich, sympathetic, provocative historical novel Fever, Mary Beth Keane explores the woman behind the infamy.

At the end of the nineteenth century, Mary Mallon emigrates from Ireland to New York City and works hard to climb the domestic service ladder until she becomes a sought-after cook for wealthy New York families. But many families she cooks for fall ill with typhoid fever. An ambitious “medical engineer,” Dr. Soper, takes note of this and traces Mary’s movements until he becomes convinced that she is the source of the contagion—a healthy carrier of Typhoid fever.

After Soper confronts Mary and she refuses to go with him for testing, he has her arrested and placed into quarantine. Mary continues to resist testing and will not allow the doctors to remove her gall bladder, where they believe the germs are manufactured, so she is ultimately kept in isolation on a remote island in the East River for more than a quarter century.

Mary Mallon is certainly a controversial figure, and Keane has created a truly layered and vibrant portrait of this woman. Mary’s violent refusals to cooperate and her adamant denials that she was spreading disease convinced many that she was carelessly endangering others, or worse, intentionally spreading illness out of malice. Fever’s Mary is stubborn and short-tempered, but she is also a fiercely independent, self-made woman. This immigrant who has pulled herself up in the world through willpower and elbow grease and sees it all being ripped from her unjustly (she believes) turns out to be a character that is sympathetic, even admirable in her perseverant struggle against forces beyond her control.

Keane does an excellent job of addressing the many moral and societal issues that the story entails. During Mary’s imprisonment, other healthy typhoid carriers are discovered and allowed to continue their lives as long as they take precautions to not spread the disease. So why is Mary kept imprisoned? Is it because she was the first? Because she refuses to admit her guilt and cooperate? Or is it because she is a poor, unmarried Irish woman at the dawn of the twentieth century?

The power of the press in her case is also examined, with newspaper articles throughout her ordeal sometimes condemning her, pointing out that she is a woman of “loose morals” living with a man to whom she is not married, and at times growing more sympathetic to her predicament. Most provocative are the questions asked of Mary (and that she asks herself). When did she realize that the disease seemed to follow her wherever she worked? Because she continued cooking after she reasonably should have guessed she was the source of the disease, is she a murderer?

Fever is a lush and detailed look at Manhattan during the early twentieth century, from the luxe residences of the upper class to the immigrant tenements to the quarantine hospitals. It is a carefully drawn portrait of a much-maligned figure who was undoubtedly more complex than history gives her credit for. Keane has breathed new life into the story of Typhoid Mary—and you will never forget her Mary Mallon. 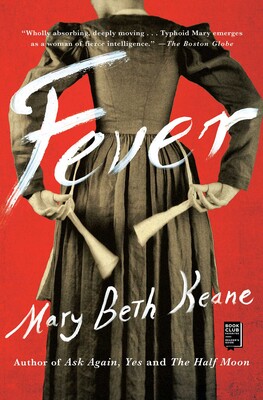 7 Historical Fiction Reads and the Fascinating Stories Behind Them

Books We Like to Give: 10 Reads We’re Excited to Gift This Year

11 Favorites Your Book Club Must Read This Fall