As fall arrived in 1967, America began to rattle with unrest. The war in Vietnam was a clear failure. Stateside, an emergent counterculture revolted. The body count soared. Washington machinated. Conspiracy and paranoia entered daily life.

A few days in October of that year birthed two events representative of that era’s political and cultural maelstrom. A disastrous battle north of Saigon raged in Vietnam while the campus at the University of Wisconsin erupted in protests. In They Marched Into Sunlight, David Maraniss intertwines the stories of both.

Maraniss shows that foreign policy is more than rhetoric. It’s life and death, and it enables utter transformation. So much collided on October 17th and 18th, 1967. In Vietnam, the Black Lions, members of the 1st Infantry Division, were ambushed by the Viet Cong. It was a horrific battle with many lives lost. Meanwhile, in Madison, students at the University of Wisconsin staged demonstrations against Dow Chemical, manufacturer of napalm. The two helped galvanize the national antiwar movement. No single event could ever encapsulate that time entirely, but Maraniss’s selection creates a moving portrait of its confusion, violence, agitation, and humanity.

I read They Marched Into Sunlight because the Vietnam War felt so unclear to me. It was guarded by clichés. I compartmentalized it as a chaotic mess and left it at that. My mother protested it and my father learned to fly a Huey in preparation for it, but it remained remote and inaccessible.

The book’s regard for the people who lived it refuses to give the establishment center stage. But that’s not to say Maraniss omits Lyndon Johnson and his circle. We see a misguided and unsure LBJ, and looming on the horizon, a young policy consultant named Henry Kissinger.

The cast of characters is vast, and this warmly peopled book owes a portion of its grandeur to Maraniss’s empathic gift for giving them new life. As a result the book has a beating pulse and a heart that reveals itself as vulnerable yet stout. We meet Clark Welch, the rowdy Delta company commander who “was a soldier’s soldier in the most elemental sense,” and Terry Allen Jr., commander of the Black Lions and a dynamic figure in the tale. We also meet dozens of ordinary men and women who fought in the jungle in Vietnam and on the campus at Wisconsin. Maraniss makes clear that the era was founded on individual lives—lives with pasts and futures, families, friends, and lovers.

It’s not Maraniss’s mission to find logic in an illogical war. Maraniss writes, “[t]he poetic and the harsh converge in Vietnam.” The book’s title is taken from Bruce Weigl’s war poem “Elegy”:

Into sunlight they marched,
Into dog day, into no saints day,
And were cut down.
They marched without knowing
How the air would be sucked from their lungs,
How their lungs would collapse,
How the world would twist itself, would
Bend into the cruel angle.

Into the black understanding they marched
Until the angels came
Calling their names,
Until they rose, one by one from the blood.
The light blasted down on them.
The bullets sliced through the razor grass
So there was not even time to speak.
The words would not let themselves be spoken.
Some of them died.
Some of them were not allowed to.

In all of the period’s sadness and tragedy, Maraniss finds a sense of renewal. The conflict ended and the world moved on. Literary accounts of war are most successful when they’ve allowed time to pass. Maraniss allowed more than thirty years. I await an equally penetrating account of the quagmire in the Middle East.
Editor’s note: The poem “Elegy” from Bruce Weigl’s Archeology of the Circle is reprinted here with permission from Grove/Atlantic, Inc.

They Marched Into Sunlight
by David Maraniss 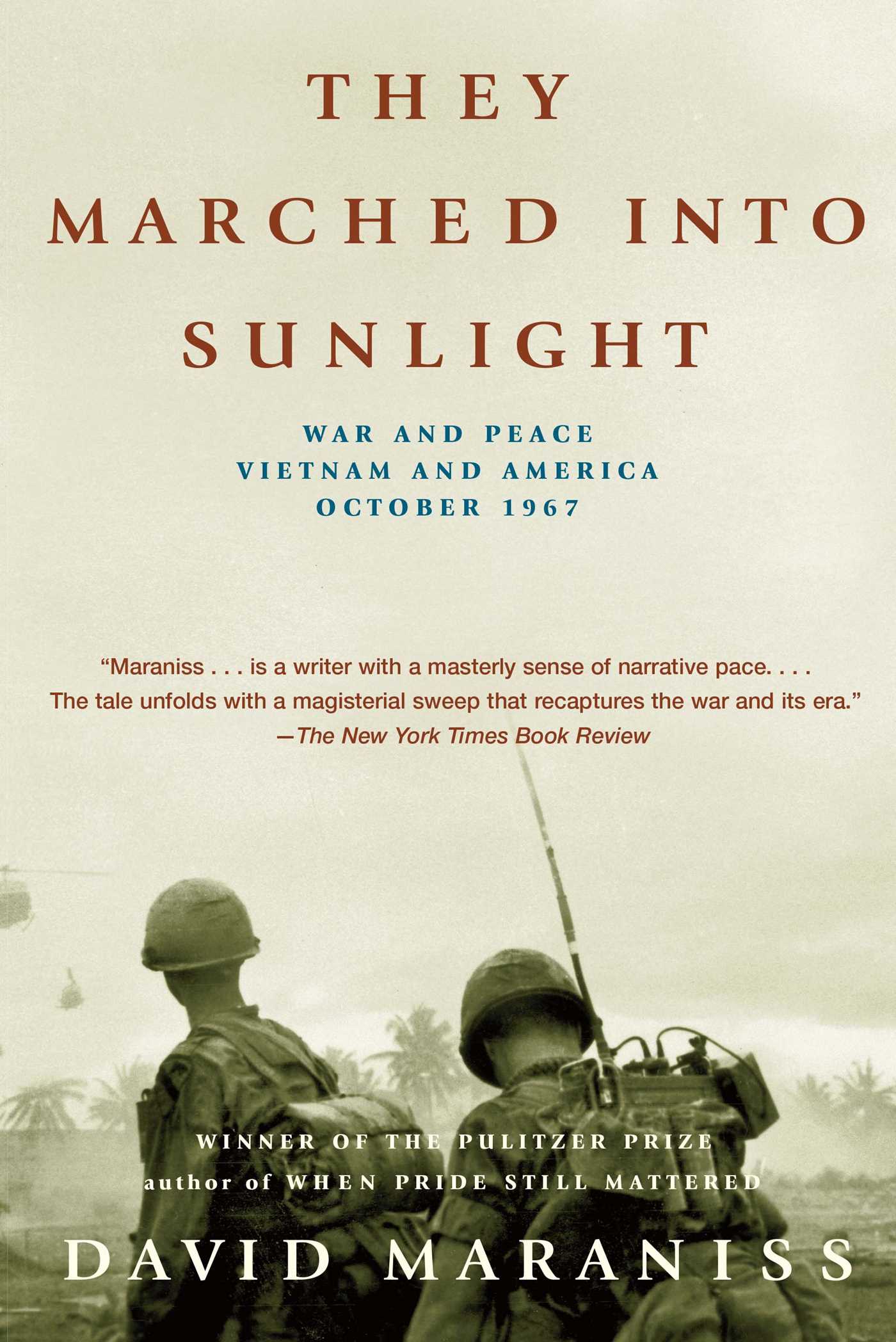 |+| Add to Your Shelf
They Marched Into Sunlight
David Maraniss

Pulitzer Prize–winning author David Maraniss tells the epic story of Vietnam and the 1960s through the events of a few gripping, passionate days in October 1967, including the student riot at the University of Wisconsin at Madison, when protesters tried to stop Dow Chemical, the maker of napalm, from recruiting on campus.

Read the full review of THEY MARCHED INTO SUNLIGHT here.

You Say You Want a Revolution: 13 Books Sure to Inspire You

11 Powerful Books That Explore the Legacy of the Vietnam War

A History Written with Heart Illuminates the War in Vietnam