I stumbled across A. S. Byatt’s Possession on a remainder table in spring 1992. Having just finished the first year of an MBA, I needed to leave behind my forced immersion in the universe of spreadsheets and PowerPoint. What better time to be seduced by a book with a lush and swirling image in blue and gold from an Edward Burne-Jones painting on its cover?

As soon as I read the first pages I knew the book was going to fulfill the promise of its cover. The novel opens in 1986 with Roland Michell, a young, impecunious scholar eking out a living in the service of Professor James Blackadder. Blackadder, who is described as “discouraged and liked to discourage others,” has been working on the complete edition of the works of Victorian poet Randolph Henry Ash (based on the Victorian poet Robert Brown) since 1951.

One day, while sifting through the bookish version of a haystack, Roland actually manages to find a needle—drafts of a letter written by the man himself to a female poet with a fervor and urgency that belies all that is understood about this most proper of men. Could it be that there was a relationship so hidden that it will radically transform the accepted narrative of his much-studied life? Luckily, the host of the breakfast referenced in the letter kept meticulous diaries and once Roland establishes the identity of the poetess, Christabel LaMotte, we’re off and running.

Roland is joined by a young feminist scholar of LaMotte, Maud Bailey, and as the pair delve into the linkages between Ash and LaMotte, we are immersed into a story that contains a dizzying number of elements, making it read like a delightful potboiler: a literary treasure hunt, multiple love stories, secrets taken to the grave.

It’s all delicious and addictive, but on top of the central mystery there is so much more to relish in the book. Byatt’s satire of academia is pitch perfect with characters representing different strains of scholarship joining the hunt. No one is safe from her incisive mimicry—traditionalists, feminists, post-structuralists, and even an avaricious collector with the astounding name of Mortimer Cropper. Everyone is ridiculed for chasing after scraps of Ash and LaMotte to validate themselves. It’s to Byatt’s credit that as much as she pokes fun at virtually everyone, including Roland and Maud, she also manages empathy for even the most ridiculous.

Perhaps the most astonishing element of Byatt’s Man Booker Prize–winning work is that she allows her Victorian characters to come to life through their own words via extended extracts of their writings in diaries, letters, fables, and poetry. It’s a tour de force and the breadth of knowledge exhibited here is dazzling. Thankfully Byatt uses her erudition in service of the book and its thematic explorations rather than just to impress.

I’ve read Possession several times and even now, more than twenty years after I first found entertainment and challenge in its pages, I find it hard to resist. Byatt aptly subtitled the book “A Romance,” for it beguiles and entrances, just as Nimue ensnares Merlin on the cover.

Anmiryam Budner is a bookseller at Main Point Books in Bryn Mawr, Pennsylvania.

Possession
by A. S. Byatt 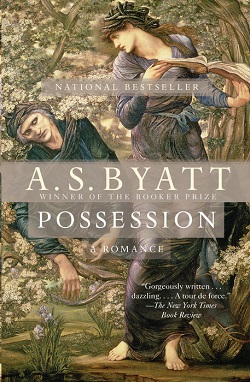 |+| Add to Your Shelf
Possession
A. S. Byatt

“I cannot let you burn me up, nor can I resist you. No mere human can stand in a fire and not be consumed.”
Winner of England’s Booker Prize and the literary sensation of 1990, Possession is an exhilarating novel of wit and romance, at once an intellectual mystery and triumphant love story. It is the tale of a pair of young scholars researching the lives of two Victorian poets. As they uncover their letters, journals, and poems, and track their movements from London to Yorkshire—from spiritualist séances to the fairy-haunted far west of Brittany—what emerges is an extraordinary counterpoint of passions and ideas.