There is a literary tradition of writing novels to give a voice to the woman behind a famous man. The Paris Wife, Loving Frank, The Aviator’s Wife (if you’re in the mood, there are eleven terrific books in our Stand By Your Man list): even the titles of these examples locate those women as wives and lovers first, if not foremost.

Marisa Silver goes one step further in her exquisite novel Mary Coin. She gives a voice to a woman famous in her own right but still completely unknown. While working for a New Deal agency in 1936, photographer Dorothea Lange took what is arguably the most iconic photograph of the Great Depression. Its subject, Florence Owens Thompson, is all but lost to the history books even as the photograph—“Migrant Mother”—lives on. Mary Coin reimagines the lives of both those women and their chance encounter in a dusty central California field.

Mary Coin is the woman in the photograph, but we meet her as a fearless sixteen-year-old in Tahlequah, Oklahoma, a self-described “half-breed,” granddaughter of the famous Cherokee Murderer, before she married a loving but sickly boy and had baby after baby after baby; before their crops dried up and they loaded everything they owned into the trunk of their old Hudson; before she stooped ten, twelve, fourteen hours a day to pick cotton; before her beloved husband died of tuberculosis, leaving her a widow with six children in tow; before her itinerant life became a blur of agricultural towns, cotton turning to oranges, stooping turning to reaching, the farther west her family traveled.

Dorothea Lange is reimagined here as Vera Dare, a child of German immigrants who suffered from polio as a girl and grew up to hide behind the camera in order to cover up her shrunken leg and pronounced limp. She sought a bohemian life in San Francisco and married an artist twenty years her senior who had more success charming women than he did painting. As the Great Depression took hold, she worked for the government, documenting not just breadlines but the people in them.

Marisa Silver starts with the most iconic image of the Great Depression and reveals the humanity behind it. Mary Coin is more than a woman battered by circumstances. She is a determined, ferocious mother, insisting that her children go to school even as she spends her days in the fields. She is a strong woman who catches the eye of a man whose father owns the California citrus farm that employs her. She is a lover, fierce and proud, not able to trust the man’s touch or his intentions, but taking this fraught pleasure for herself with her eyes open to the heartbreaking and dangerous consequences.

The real “Migrant Mother” remains forever etched in our minds as a woman with a lined face and dirty fingernails, flanked by her children. The photograph has come to represent the Depression itself, and if you google Dorothea Lange, it’s the first image that appears. But Silver pushes the story past that moment in Nipomo, California, in 1936. The Great Depression ends. The children grow up. That moment haunts both women throughout their lives and they must reckon with the legacies it created for them. Silver writes with an acute eye to detail and an abundance of compassion. She is aware of the power of art—for Vera Dare, there is dignity in the photograph; for Mary Coin, perhaps disgrace. Silver examines both and more, taking us past the surface to the wealth of human emotion and experience beneath it.

Mary Coin is a moving, beautiful companion to “Migrant Mother.” Once you read it, you will never look at the famed photograph the same way again. This deeply researched, rich novel challenges us to look beyond even the most haunting of images to remember that a photograph captures a moment in time, but not a life in full.

A lifelong reader and writer, Wendy Sheanin is Vice President, Director of Marketing at Simon & Schuster. 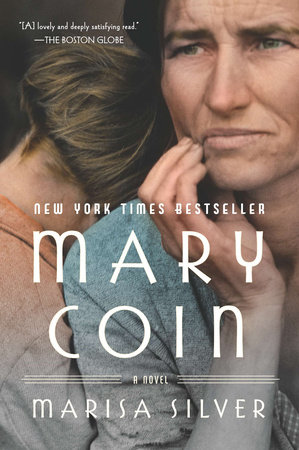 In 1936, Dorothea Lange shot the most famous photograph of the Great Depression, “Migrant Mother.” Marisa Silver’s novel breathes life into that famous image in a tremendous reimagining, a compassionate, poignant, dignified portrait of an iconic and unvoiced figure.