While perusing my overloaded bookshelves, so many of the books I see are filled with dark character arcs and shocking deaths (I’m looking at you, GAME OF THRONES—but I still love you). I get that life is dark and full of terrors, but Rainbow Rowell’s ATTACHMENTS was a rare, treasured experience that I never wanted to end.

While Rowell is known for her beautiful young-adult novels ELEANOR & PARK and FANGIRL, she has brought her whimsical yet relatable style to Attachments, her first adult novel. The story is told from the perspective of Lincoln, a shy man in his late twenties working in a newspaper’s IT department. When Lincoln applied to be an “Internet security officer,” he pictured himself building firewalls, crushing hackers, and protecting the freedom of the press, and he has been unpleasantly surprised to discover that his day-to-day consists of reading all employee emails flagged for inappropriate content. As a result, he finds himself reading the email exchanges between Beth and Jennifer, two of the paper’s employees. The more he reads, the more he finds himself falling in love with the kind and funny Beth, but now it’s way too late to introduce himself to her.

Attachments is witty without being snarky; funny, but not at anyone’s expense. It’s the literary equivalent of my homemade cinnamon rolls—sweet, buttery, and worth getting out of bed for. The characters evolve from dependent to independent and from unfulfilled in love to fulfilled. Like any chef worth her salt, Rowell uses her talent to make the story greater than the sum of its parts.

Some might argue the novel lacks heft because (spoiler alert) it ends well. Every page of this book says that happiness is worth our time as readers. I started to write down my favorite lines, but had to quit after two pages of scrawled quotes. There are simply too many to admire.

Rowell creates simple but beautifully layered images. When Jennifer describes how her mother seems to be rooting for her marriage to end in an email to Beth, she writes, “She keeps poking my marriage with a toothpick. Almost done!” I savored the baking reference while feeling the annoying little poke in my side. I’m a sucker for a good food metaphor. After all, I did write a novel called THE COINCIDENCE OF COCONUT CAKE.

Then there are the sentences containing so much truth, the words resonated in my stomach. When Beth describes her boyfriend’s distant behavior, she writes, “I think of it like winter. During winter, it isn’t that the sun is gone (or cheating on you with some other planet). You can still see it in the sky. It’s just farther away.” These are heartbreaking sentences, layered and genuine.

Lincoln, Beth, and Jennifer are refreshingly honest characters. Their pain became my pain, their laughter became my laughter, their swoony kisses became my swoony kisses. Without giving away more spoilers (because you need to read this book), the final scene hits all the best romantic beats and Attachments earns its happy ending.

So, dear reader, don’t make the mistake of dismissing ATTACHMENTS just because it ends well. Rowell laces her novel with humor, romance, and sincerity, but like a master chef, she takes the relatable and recognizable and dishes up an elegant and unique story.

The happy ending just makes it all the sweeter. 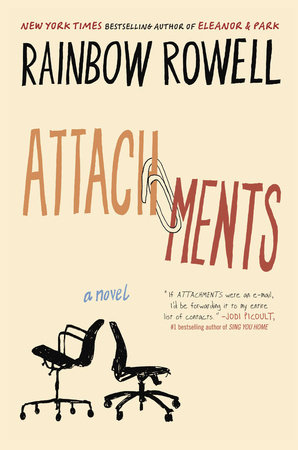 Sincerely, Your Bookshelf: 8 Books of Love Letters, E-mails, and Postscripts

A Charming, Witty Novel That Makes You Believe in Happy Endings