A new president is in the White House and the American capital vibrates with the promise of a renewed government, fresh ideas, and bold initiatives. These include declaring the president’s home state of Idaho a nuclear-free zone, launching the National Metrification Initiative to convert America to the metric system, and announcing a visionary proposal to normalize relations with Cuba. While this last example infuriates the nation’s Republicans, it is hailed in Havana as “an example of the wisdom of America’s new leadership.”

THE WHITE HOUSE MESS is a piquant satire about the chaotic administration of President Thomas Nelson Tucker (TNT) as it lurches disastrously from crisis to crisis—political, domestic, international—as told in the memoir of White House Deputy Chief of Staff Herbert Wadlough. Originally an accountant, Herb has been with TNT since before the Idaho campaign: he is implacably loyal, hopelessly square. He becomes uneasy anywhere near the ominous red phones in the White House Situation Room. He sometimes thinks he may not be suited for government work.

Herb’s deadpan narrative hilariously documents the protracted West Wing bureaucratic warfare among his ambitious colleagues. He must constantly fend off the rapacious Washington press corps (reporters always seem to hear about administration scandals before Herb), and deal with an imperturbable talent agent from International Creative Management representing the captivating First Lady (who is considering acting in another soft-core film).

Only a few things in this White House really matter: access to the Oval Office; staying on the distribution list for classified documents (Herb’s clearances are disastrously downgraded from “TYPHOON” to “DRIZZLE”); having (and keeping) an executive parking space; and management of the White House mess (namely, the basement canteen, control of which Herb loses then wins back, quickly restoring his favorite meatloaf and buttered eggplant to the menu).

Foreign policy bedevils the Tucker presidency. Herb is dispatched to Cuba to propose a meeting between Fidel Castro and President Tucker, but drinks his first-ever Cuban beer and is sick on Castro’s pant leg. The historic, mid-ocean summit aboard an aircraft carrier to ratify the opening of diplomatic relations goes disastrously wrong when Fidel ignores the president and flirts with the First Lady. Castro whispers that he’s seen all her films.

Things only get worse as Tucker’s presidential term wears on: when the Bermudian United Peoples’ Insurrection (BUPI) starts burning golf courses and organizing attacks against the US Naval Air Station located there, the president struggles with the enormity of going to war, especially since his defense budget cuts and ship decommissionings have so depleted the US Navy that deploying a fleet of more than three ships to Bermuda is impossible. Ominously, ties between BUPI and Moscow are improving daily, prompting the president to tell Herb that he is “learning a lot” about the Soviet Union. A last-minute proposal to send Jesse Jackson to Bermuda to negotiate with BUPI is rejected because, as Herb notes, Jackson has a habit of making too many concessions “of the kind that led the US to abandon our former naval base in Guantanamo Bay, Cuba.”

Written by Christopher Buckley, a former speechwriter for then–Vice President George H. W. Bush, this 1989 parody perfectly captures the manic world of the nation’s capital, where politics and image-making collide with real-life realities. The insider world of government doublespeak, the feuds, the strategizing, the endless meetings, the miscalculations, the deteriorating opinion polls, the frantic damage control over the gaffes and missteps, all are pitch perfect.

Buckley’s plot is intricately clever and a delight to read. But beneath this wry, playful satire lays a startling epiphany: even twenty-six years later, the Washington briar patch has not changed. A new administration’s honeymoon period fades as it is overwhelmed by the vicissitudes of the office. Egos continue to swell and blind formerly ordinary people to their ordinariness. “Bold initiatives” are neither bold nor dynamic if they do not actually accomplish something beneficial. Truthfulness is always a rare commodity.

Perhaps another reason to read this book: those who are unaware of history are doomed to repeat it. 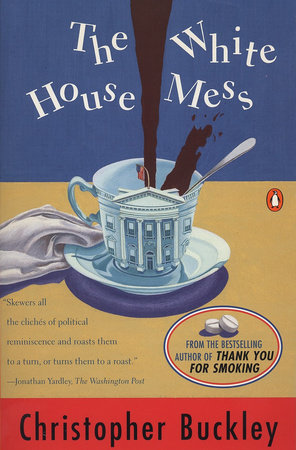 |+| Add to Your Shelf
The White House Mess
Christopher Buckley

A Witty Satire of Presidents and Insider Politics