When I first read Kazuo Ishiguro’s THE REMAINS OF THE DAY, I was barely fifty pages in before I was tempted to hurl the book out the window. The narrator—Stevens, a British butler pathologically devoted to maintaining the dignity and restraint required of his position—was so repressed, so buttoned-up, he was making me crazy. I had never encountered a more emotionally distant first-person narrator. Here he is on his favorite topic: “If one looks at the matter objectively, one has to concede my father lacked various attributes one may normally expect in a great butler.” And: “All I can say is that after one has been in the profession as long as one has, one is able to judge intuitively the depth of a man’s professionalism without having to see it under pressure.” What was with all those maddeningly neutral “one”s? Why not “you” and “I” (“after you’ve been in the profession as long as I have, you’re able to . . .”)? Then there were all the “indeed”s and “in fact”s, the “of course”s and “in my view”s—small but insistent reminders that this character was annoyingly certain of every damn idea he put forth. How on earth was I going to endure two hundred more pages of this insufferable person (or “personage,” as Stevens would say)? I went to bed that night determined to do something I hardly ever do: abandon a book without finishing it.

And then something strange happened, something that had never happened before and hasn’t since: I dreamed about the book. Stevens, that buttoned-up bore, was traipsing around my subconscious in his butler finery. When I woke up, I had to admit that something important was going on here, and so I continued to read the novel, and in fact could not put it down.

As the story continues, it becomes clear that Stevens’ emotional remoteness is less an admirable trait of British servility than a defense against an awful truth he refuses to face: Lord Darlington, Stevens’ former master, was a Nazi sympathizer in the years between the World Wars, a fact that threatens to destroy the butler’s own reputation, and calls into question his life’s work. Between this and his inability to acknowledge his father’s shortcomings as a butler (and as a father), no wonder Stevens continually props up his pronouncements with all those “of course”s and “indeed”s: These rickety linguistic scaffolds are meant to bolster his self-delusion.

Just as tragically, his unwavering belief that a butler’s duties preclude any emotional attachments prevents Stevens from acting on his unspoken feelings for Miss Kenton, the onetime housekeeper of Darlington Hall. Their scenes together, with Stevens bending over backward to neuter the obvious love he feels for Miss Kenton, are almost physically painful to read. This is most evident in the famous “sentimental romance” scene, in which Miss Kenton barges into Stevens’ private rooms and insists he show her the book he’s reading, a romance novel that the butler claims will help improve his “command of the English language.” That this moment in the novel, consisting entirely of the housekeeper goading the clearly embarrassed butler to show her a book, feels like the most intimate of love scenes—“Suddenly the atmosphere underwent a peculiar change,” Stevens says, “almost as though the two of us had been thrust on to some other plane of being altogether”—illustrates how truly repressed this narrator is, and how in love.

It is genius of Ishiguro to frame the novel with Stevens’ cross-country journey to convince Miss Kenton to return to Darlington Hall, which she left years ago (in part because of Stevens’ failure to return her attentions). Will the butler grasp this last chance to set things right? Will he finally connect with someone on a human level? Or will he end up alone with his delusions at Darlington Hall, now owned by an American given to the supremely un-British habit of bantering?

Many more people, I imagine, remember the Merchant Ivory film version with Anthony Hopkins and Emma Thompson more than the novel, and the movie is remarkable for its ability to translate what is essentially an interior tone into cinematic terms. But the book remains the richer experience, boring relentlessly as it does into the heart of its emotionally limited narrator until we find the vulnerable center. I hope that, with all the attention being paid to Ishiguro’s new novel, THE BURIED GIANT, readers will return to this classic from more than twenty-five years ago.

So, why did Stevens invade my dreams? That’s between me and my therapist, but let’s just say he (and Ishiguro) had something to tell me about the art of both storytelling and living: One, a writer can reveal just as much about a character by withholding; and two, one should not attempt this technique in one’s personal life, for it leads only to loss and misery.

The Remains of the Day
by Kazuo Ishiguro 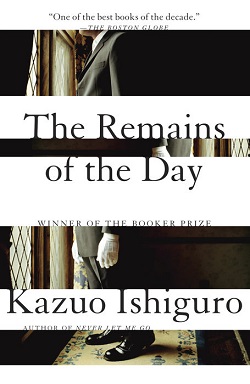 |+| Add to Your Shelf
The Remains of the Day
Kazuo Ishiguro

11 Literary Servants Tell Their Own Stories

A Profound and Compelling Study of a Fading, Aristocratic Britain