In the 1960s, I was a lonely black girl living in California in an almost all-white suburb that my family integrated years before. There was a sprinkling of Jewish families and one Chinese family, but this lower middle-class community was a stubbornly white enclave, and wanted to keep things that way. My family was only able to buy the land to build our house by secretly going through a white front, a buyer who deeded it back to us, since the owners wouldn’t sell to a black family directly. For nine years, there were no other African-Americans in my elementary, middle school, or high school classes. We all—my mother and father, brother, and two sisters—adapted to the reality of living in a community that didn’t quite know what to do about us. There were some neighbors and schoolmates and teachers who extended a friendly hand, but there were also persistent and vocal haters, young and old, who called us filthy names and continually threatened to burn down our house and issue terrifying death threats.

Until I went off to college, the only place I felt relatively safe was inside the walls of our home, or even better, inside the pages of a book where I felt that what I was experiencing growing up wasn’t the only way life could play out. I read voraciously, and in my favorite books, girls were strong and able to overcome whatever obstacles came their way. Adults had a moral center and tackled injustice with clear-eyed determination. People changed for the better.

Fast-forward to the 1990s, and Octavia Butler. A wildly inventive and gifted author, she has most often been categorized as, and marginalized as, a science fiction writer. I read and loved Kindred, her most well-known novel, when it was released in 1979. Kindred is the story of an African-American woman transported from 1976 Los Angeles to pre–Civil War Maryland where she meets her forebearers, a white plantation owner and a slave woman. It brilliantly utilized time travel to examine the dynamics of antebellum slavery and its legacy in contemporary American society. But then she wrote Parable of the Sower, and I was convinced I’d discovered genius. A few years later, the MacArthur Foundation recognized her achievements with a MacArthur Fellowship. Butler was the first science fiction writer to win one of the famed “Genius Grants.”

Parable of the Sower envisions a dystopian future where the government has collapsed and armed gangs roam the streets. This is a world of severe global warming, poverty, chronic water shortages, and pervasive drugs, this is a world that erupts in abrupt violence. Lauren, our protagonist, is a minister’s daughter living with her family in California. When her walled community is invaded—her family murdered and her home destroyed—she must flee to survive.

This dystopian novel predates Cormac McCarthy’s The Road and presents the reader with an unforgettable character struggling against the chaos in which she finds herself, refusing to give in to the darkness around her. Lauren is the driving force in her own life, never passive, and is deeply empathetic to the pain of others. She understands the need to create a new world out of the chaos that surrounds her and founds a new religion to nourish herself and her compatriots on their journey to found a community free of violence. This philosophy, called “Earthseed,” is encompassed in these lines: “All that you touch, you change. All that you change, changes you. The only lasting truth is change. God is change.”

The beauty of Parable of the Sower lies not only in Lauren’s keen instincts for physical survival, but in her successful redefinition of a sustaining philosophy to service both the oppressive present as well as the uncertain future. Although she was forced to live in devastating times, she was never unresisting. This philosophy struck an intensely personal chord with me as I rooted her forward, and as she tapped the same well so many of us need to draw on to outlast a bad situation in which we feel trapped.

Lalita Tademy is the author of Citizens Creek, now out in paperback.

Parable of the Sower
by Octavia E. Butler 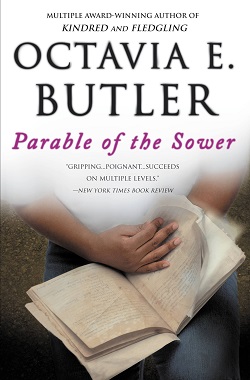 |+| Add to Your Shelf
Parable of the Sower
Octavia E. Butler

9 Characters Rebuilding Their Worlds for the Better